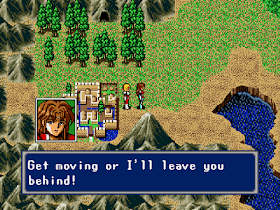 Genre: Role-Playing (RPG)
Perspective: Behind view, Top-down
Gameplay: Japanese-style RPG (JRPG)
Art: Anime / Manga
Pacing: Turn-based
Interface: Direct Control, Menu Structures
Setting: Sci-Fi / Futuristic
Published by: SEGA of America
Developed by: Sega AM7 R&D Division
Released: 1994
Platform: SEGA Genesis / Mega Drive
Phantasy Star IV: The End of the Millennium is a console role-playing game, released in 1993 for Mega Drive in Japan and in 1995 for Sega Genesis in North America. This is the fourth and last game in the original Phantasy Star series. The game also went to the Wii Virtual Console in Japan on June 24, 2008, in the PAL regions on November 14, 2008, and in North America on December 22, 2008 at a price of 800 Wii points. Phantasy Star IV is also part of the Sega Genesis Collection on the PlayStation 2 and PlayStation Portable and the Sonic's Ultimate Genesis Collection for the Xbox 360 and PlayStation 3. In 2012, the game was ported and released on Windows via Steam.
Phantasy Star IV has preserved many elements of the gameplay from previous games of the series, including the top view, turn-based battles and magic spells, the transport function, and introduced a new interesting feature - the ability to combine combat spells of various characters to subsequently apply various powerful magic attacks. This game is usually considered the last game from the original Phantasy Star series. It completes the history of the Algol system, being the sequel to Phantasy Star II (Phantasy Star III goes in parallel with the events of the fourth part).
Nintendo Power magazine called Phantasy Star IV one of the greatest role-playing games of all time. In 2012, GamesRadar placed it on the first place in the list of "The best games for the Sega Genesis of all time".
‹
›
Home
View web version