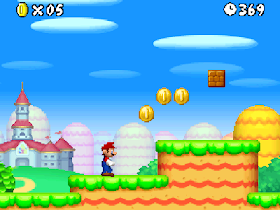 Genre: Action
Perspective: Side view
Gameplay: Arcade, Platform
Published by: Nintendo of America Inc.
Developed by: Nintendo Co.
Released: 2006
Platform: Nintendo DS (NDS)
The role of the original New Super Mario Bros. with Nintendo DS is difficult to underestimate - this game more than 10 years ago, could rehabilitate the gameplay of 2D Mario and show the world that 2D-platformers can still be interesting and innovative, and also showed the leaders of Nintendo how much the players missed the classics that he so successfully revived still the same Shigeru Miyamoto. The advent of this game in the DS Virtual Console for many has become a good chance to remember the past, and for someone, perhaps, is an opportunity for the first time to get acquainted with an excellent portable hit.
We all know perfectly well that in the platformers of the Mario Bros. series. the plot never played a particularly important role: in the early games of the series, it was served with a couple of sentences printed in the manuals to the original cartridges.
At the head of the corner is always the gameplay and its diversity: in the game for the portable console, Mario constantly gets into the most various scams and overcomes the most cunning obstacles. Our plumber has to flee through quicksand in the deserts, clever traps in Bowser's castles, houses with ghosts Boo. Help in overcoming all these tests Mario will be new (for the game of 2006) improvements that have not been met anywhere before.
We must immediately note that the New Super Mario Bros. is built according to the standard scheme of the Mario platformer: there are eight worlds in eight levels, not counting the secret ones, which you can get to only by finding a secret exit at certain stages, which will open the way for new levels. As always in the platformers about Mario, the passage of the stage is limited in time, and sometimes entire levels are built on this, where obstacles must be overcome in a hurry. Also worth noting good music, which may well be in your playlist: the composers managed to sustain the mood at almost all levels: from fun starting locations and right up to Bowser Castle music will create the right mood for each of the worlds.
The complexity of the game can surprise newcomers: sometimes a fun and bright game can include such a "hardcore" at levels that some of the new indie games that deliberately try to look "hardcore" will seem like a light jog. There are really moments where nerves are wrapped in a ball, and the controller in his hands wants to bite from impotent rage: so this colorful and cheerful game can make an unprepared person. Fortunately, in the version for the Virtual Console there are fast save, and, if desired, the game can go without a single death on the in-game counter. Of course, this simplifies the game to some extent, but for such a complex game this is not a minus, believe me.
Also in the game there are mini-games that once demonstrated the capabilities of the touch screen DS, the then-newest portable from Nintendo. The games are really interesting and exciting, and in some of them you can get stuck on for a very long time; and their total number can impress even the biggest fanfare: here there are mini-games for every taste and color, the variety of which can envy even the Mario Party DS! So do not be surprised if you suddenly find out that you have played ten hours without even passing the first level.
And now it's worth talking about purely technical things, I personally believe that re-publishing for Virtual Console on Wii U games with Nintendo DS is a very strange decision. Everything here is focused on playing on the road: mini-games should brighten up any expectation or trip. Playing on the big screen is not particularly pleasant, even if you take into account the considerable variety of virtual console contrivances like blur of pixels (which blurs the game so that it feels as if your TV is soaped), or the different layout of DS screens, which saves the situation with a rather specific structure console. But it is worth considering that the game itself was developed for portable format, and its passage in the hospital is a very dubious pleasure.
‹
›
Home
View web version