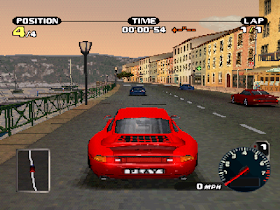 Genre: Racing / Driving
Perspective: 1st-person, Behind view
Gameplay: Arcade, Vehicle Simulator
Vehicular: Automobile, Track Racing
Published by: Electronic Arts
Developed by: Eden Studios
Released: 2000
Platforms: PlayStation (PSX, PS1), Game Boy Advance (GBA)
This is another of the sequels in the series of racing games Need For Speed. Continuation could not become Gran Turismo, because this position is already taken; so they needed something more specific. Porsche! This is an exclusive license, which is unattainable even for the biggest names in the business world. It is Porsche who determines the pulse of the race. And so Porsche Unleashed became the most fascinating all-encompassing game with Porsche, which you can only dream about. The impressive amount of basic Porsche-related features that appear before you when the game loads, leaves you in some thoughtfulness - on which path to go. Perhaps the most attractive activity is the opportunity to become a Factory Chauffeur. This is an original idea, as a result of which you start the game by joining the company engaged in the production of Porsche, as a testing driver and continue to make your career. You may be asked to test the new system with all the steering wheels under conditions where the road is covered with ice crust, and the set time is limited, and you must surpass this time traveling around among road obstacles. If you pass this test, you will achieve what you will be given next. This may be something unpretentious, like, for example, to exceed the achieved time record on a given track. Good job performance means good gifts from the company in the form of cars as signs of appreciation. These machines you can save for further use in other game modes. It takes an iron will to force itself to turn off the game, and without trying its strength and not having achieved success in some bothersome test. Due to this, it is possible that the "Factory Chauffeur" mode will seem even shorter than you dare to hope. After this, go to the next key section of the game, no less inventive - the Mode of Evolution. The idea was to demonstrate the changes in the Porsche car, going all the way from the earliest to the latest models, including the 911 Turbo 2000. There are three different eras, supplemented by a huge selection of cars that can be bought - both new and used.
‹
›
Home
View web version