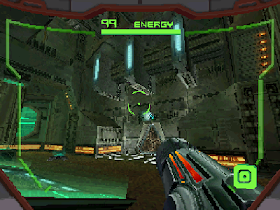 Genre: Action
Perspective: 1st-person
Gameplay: Puzzle elements, Shooter
Setting: Sci-Fi / Futuristic
Published by: Nintendo of America Inc.
Developed by: Nintendo Software Technology Corporation
Released: 2006
Platform: Nintendo DS (NDS)
The brainchild of Nintendo is the best proof that for the success of modern video games there is no need to cast a player with luxurious girls in the most outspoken outfits. The main heroine named Samus Aran is dressed in a Puritan armored suit, armed with a huge "cannon" and is able to fold into a ball. She has traveled the galaxy since the days of SNES, and during this time managed to make herself a big name. We did not see her face, we do not know anything about her biography and yet we consider her to be one of the most outstanding personalities. And not because she poses positively in front of the camera.

Traveling around the galaxies

Owners of Nintendo DS, familiar with the series, expect a number of transformations: instead of the "flat" original appeared a very curious shooter, the pace of the study of locations has grown significantly, and now a stylus is needed to control Samus. No one until the very end did not understand how the developers are going to implement such management. But all doubts disappeared right after the game appeared on the shelves: Hunters got the best management system among portable platforms. Even despite the excessive complexity in the development and the increased level of injuries among players.
According to the idea of ​​the authors, the standard scheme looks like this: the left "Shift" is responsible for the shooting, the cross is for the movement, and the stylus for the aiming. On the standard Nintendo DS, such grace at first causes serious inconvenience - it will take at least an hour to get used to or change the layout to a more familiar one. On DS Lite, the problems are different: the console wants to be put on its knees or on the table, because managing the stylus on weight is much more difficult. Although in this case the solution to the problem of control over the character is only a matter of time and patience.

With the habit of accusing Metroid Prime: Hunters in excessive self-will and principled. You can only be saved in strictly designated points, which miraculously coincide with the end of the level. The ability of enemies to steal valuable artifacts is absolutely out of place - it's much easier to get out of the game and start a mission again than trying to return the stolen goods. Not to mention the long-standing obsolete trick "until you shoot everyone in the room, the doors will not open" and the duration of the individual episodes, demanding to fight with two bosses, explore the dungeons and after all this go back, repeating the whole way from beginning to end. Of course, the tasks that have been set vary from mission to mission, but it does not change the essence of the matter: the desire to learn the outcome of the story is not lost, it is necessary to play the game in one gulp.
In this scenario, the true beauty of Metroid Prime can be seen only after the repeated passage of the already studied planet. During the first landing, the player runs through the corridors without the right to step to the side. Returning after the long wanderings with new weapons, artifacts and abilities, you see the old map in a completely different perspective. Each of the presented planets could serve as the basis for the whole game, and there are not one or two here. The same goes for weapons: at first, there is no need to replace it, since ammunition is still endless, and all sorts of modifications of "trunks" are used extremely rarely. All the nuances become evident much later.

A separate item here is multiplayer. Thanks to a fast graphics engine and a unique control system, network battles are almost a complete replacement for single-user mode. However, for the sake of speed it was necessary to sacrifice beauty and to make a visual part hardly reaching one level with games for PS one. Unpleasant sediment remains from the chosen color palette of predominantly dark tones, and even with poor lighting.
However, all of the above problems can be simply ignored - positive qualities are still overshadowed by minor miscalculations. And although most were waiting for an almost perfect game, the achieved result can not be denied, as it is the best of today's shooters for a portable platform. The long-suffering genre did not get accustomed to the PSP, but it took a second wind on the Nintendo DS, and it's a modest, but still revolution.
‹
›
Home
View web version