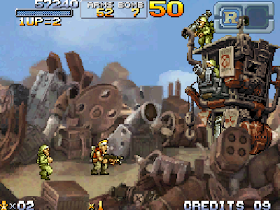 The squadron of Peregrine Falcons (PF Squad), the Ikari Warriors, and the Sparrows, are once again in search of General Morden and his army. Its mission is to catch General Morden and prevent his attempts at another coup against the government. However, as soon as Morden is defeated, a strange army of the future came to his aid. Now, they must face Morden, once again and this time, put an end to his plans once and for all.

The game has seven missions and three difficulties: Beginner, Normal and Difficult. Metal Slug 7 uses the Nintendo DS's touch screen as a map for the mission, making it easier for the player to find prisoners, weapons and vehicles. The PSP version, this map is removed, but a multiplayer mode is added via Wi-Fi connection.
With the chosen difficulty only changes the speed and resistance of the enemies while keeping their animations and attacks while the rest of the game (scenarios, time, number of missions and ending do not suffer changes). It can increase the time of each mission to 90 but it does not allow to lower it of 60. The ending is the same as in the Metal Slug X.
A new weapon called "Thunder Shot" (T) is added to this title, as well as three new vehicles: Slug Truck, Slug Gigant and Heavy Armor.

Marco: his weapon by default (the gun in Normal or Hard mode, the Heavy Machine Gun in Beginner) has doubled its power.
Tarma: When in possession of a Slug, the resistance and power of the vehicle are doubled, the firepower of the Canon Vulcain is increased by 50%. He is also able to use the Vulcan Fix to shoot in one direction continuously while moving.
Fio: it starts at each mission with a Heavy Machine Gun (in Beginner mode, it starts with the Big Heavy Machine Gun). The number of ammunition for special weapons is increased by 50%.
Eri: she gets double the amount of pomegranate when she starts a mission or when she recovers. She can also throw grenades in any direction.
Ralf: He compensates for his lack of ammo and grenades by doubling the power of his melee attacks. He is able to use the special "Vulcan Punch" attack that inflicts heavy damage to all types of enemies. He can also cash 2 shots before dying.
Clark: He is able to use the "Argentina Backbreaker" attack against all enemies (except enemy vehicles), he is immune to attacks when he executes this attack. Running this attack several times in a row can accumulate a lot of points.
Leona (Metal Slug XX via DLC): it is the strongest of all in melee thanks to its attack "Moon Slash" which makes it possible to neutralize all the enemies as well as the projectiles, nevertheless this attack does not bring back points. In addition, the number of ammo special weapons and grenades are increased by 20%, it also retains special weapons recovered when it dies (except when using a continuous), and finally the power of its weapons are also increased.
‹
›
Home
View web version