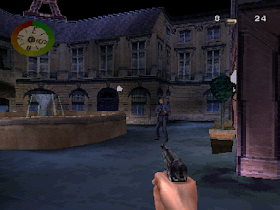 Genre: Action, FPS
Perspective: 1st-person
Gameplay: Shooter
Interface: Direct Control
Setting: Europe, Historical Events, World War II
Narrative: Spy / Espionage, War
Published by: Electronic Arts
Developed by: DreamWorks Interactive L.L.C.
Released: 2000
Platform: PlayStation (PSX, PS1)
The game, based on the plot of the famous Hollywood blockbuster, certainly should have been continued, especially since the first version enjoyed and continues to enjoy great success among fans. The fact that it is called Underground does not mean that the action takes place underground. Simply the plot is largely connected with the active French resistance, which is carried out in an underground manner, hence the name Underground. You play the role of Manon, a charming woman, a participant in the French resistance, and one who is familiar with the first game, certainly, remembered her charming face.
So, you are Manon, acting on absolutely new huge levels, shooting everywhere, where possible, scoundrels with a swastika that are on your way. You must do everything in order to fulfill the task set by the French resistance, and to ensure victory over the Nazis. In fact, the game has changed not very much. It's the same active shooter, but this time the graphics are much better, it's just superb. Levels of steel are two times larger than before, and the tasks that you have to solve are much more complicated. In addition, the levels are now much more original than in the original. You can interact with various characters who are sometimes able even to shoot an enemy and help you in this way. The game has become much more interesting and exciting, especially since enemies have new cars, self-propelled guns with an unlimited amount of ammunition, which are very difficult to destroy if they are on your way.

This code is the master cheat that unlocks allof the secret codes. First, go to the main menu and select options. Then go to passwords and type in ''ENTREZVOUS'' Then go to send. Enter the passwords again and type ''PORTECLEFS''. Then go to secret codes and all secrets will be unlocked. Civil war mode is every man for himself in missions. The enemies shoot at each other and you. Also, Wacky taxi mode is when you have 1 minute to complete the level and the only way to get more time is to kill.

Simply enter ENTREZVOUS as a password, then LEMONSTRE. To play the level, select 'Panzernacker Unleashed'.