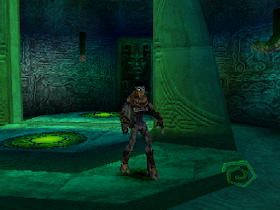 Genre: Action
Perspective: Behind view
Gameplay: Metroidvania, Puzzle elements
Setting: Fantasy
Narrative: Horror
Published by: Eidos Interactive
Developed by: Crystal Dynamics
Released: 1999
Platform: PlayStation (PSX, PS1)
Already the first look at this amazing game shows that the developers did not try to make a continuation of a successful game and speculate on the favorite characters. A completely new team tried to create a product not only of the highest level, but also reworked the plot to make it more logical and meaningful. Fans of this game remember how the first version ended - Cain was faced with a fateful choice: to commit suicide and thereby restore the disturbed balance in Nosgoth; or do not care about everything and become the ruler of the World. Soul Reaver begins and it becomes clear that Cain chose the second option. For a thousand years the world has become the fiefdom of Cain, who does what he will, and everything has changed beyond recognition (literally, several landscapes have survived). You will see, true, the surviving old Napalkeeper's split skull. The conflict between Raziel and other vampires is the core line of the plot of the game. Raisel, being the first creation of Cain, turned out to be his first enemy, so for his "life" will have to shatter.
Developers reasonably located the shipping point at the very end of the game, because how can you finish off the game if you are already dead. And, nevertheless, fights with vampires will bring you great pleasure. During the fight, Reisel automatically turns his face to the enemy, which of course facilitates the conduct of the battle. However, battles are not considered as a meaningful element of the game action, rather it is a way to solve another puzzle. Moreover, a vampire can only be destroyed by mythological methods: Raisel can pierce it, throw it into the water, fry it in the fire, or expose it to the sun. Well, you, of course, will help him, hurling stunned enemies in the water or piercing the wall with thorns. And, of course, killing them with the mystic sword Soul Reaver, which Cain had acquired back in Blood Omen. Once the sword is in Reisel's hands, it becomes a powerful and versatile weapon.
In conclusion, we note an absolutely stunning level of graphics, both in terms of image quality, and in the architectural and artistic sense. And also a high download speed of the game - a new "engine" removed this nasty problem of the first version, and now the download of huge levels is so fast that the virtual world seems simply continuous! Fans of the series will certainly be delighted with the appearance of this version and are much surprised by the tremendous changes that have "occurred over a thousand years."

Question: In some tutorials it is recommended to use the Soul Reaver Projectile Attack in the bell tower of Bell Tower to knock down five boxes placed on top of each other, but unfortunately this trick does not work.
Answer: Indeed, maybe there is a mistake here, and you just need to move the stack of boxes to the low ledge, then climb onto this ledge and slam down the blocks one at a time. Then you can slide these blocks into the corresponding holes and open the second Organ Room switch.
Question: At the end of the passage of the level of Bell Tower (bell tower), you must step on the pressure plate to open the door near the first bell, but for some reason it closes before you run to it.
Answer: You need to perform a fairly simple trick. When you step on this pressure plate, immediately go to the spectral form to freeze time, and then you can easily go through the door before it closes.
Question: At the level of Silenced Cathedral, I just can not figure out the block puzzle.
Answer: Before solving this puzzle, kill all the vampire spiders in the room so that you can safely move the blocks without fear of their attack. These nasty insects, of course, will come to life, but the process of their revival is extremely slow, so you have enough time to cope with your work. In this puzzle, the only difficult part is to fill a void that is just above the ground level. To cope with this task, you must put a few blocks on top of each other, and then push this stack of boxes right into the wall. However, you need to calculate in advance how many boxes you need to put in order to accurately fill this niche. Here. " in fact, that's all.
Vampiric weaknesses
Raisel, like all vampires, has its weaknesses. They must be used in fights with all the evil spirits of Hell.

How to defeat Cain

Get to Cain in a large circular room with several levels. Keep to the center at the very bottom. Here you will find an object restoring health to the norm and supporting it at this level. When Cain attacks with his energy balloon, stand on the subject and correct the shaky health. Then look around, and when you see a big blue energy ball, run straight to him, it's Cain preparing to attack! Cut it with your sword Soul Reaver and continue in the same spirit until you destroy it. At the very end of the fight, Cain will climb to the highest level in the room, and you will not be able to see his energy ball. Then figure out where he can be, quickly run up there and ruban with all the swing - a few successful attempts, and victory!
‹
›
Home
View web version