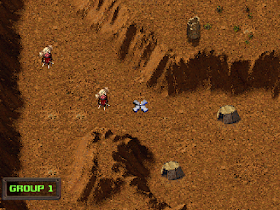 Genre: Strategy / Tactics
Perspective: Bird's-eye view
Visual: Free-roaming camera
Pacing: Real-Time
Gameplay: Real-time strategy
Interface: Multiple Units / Characters Control, Point and Select
Setting: Post-Apocalyptic, Sci-Fi / Futuristic
Narrative: War
Published by: Infogrames Europe SA
Developed by: Beam Software Pty.
Released: 1999
Platform: PlayStation (PSX, PS1)
I wonder if it's possible to mention Command & Conquer more often when writing a review than the game I'm writing about? If you have never heard of Command & Conquer, then apparently you have been living in a Tibetan monastery for the last few years or have been languishing in Chechen captivity. Games of this genre are especially successful on computers, but when a super-console like PlayStation appeared, it was possible to see the colorful graphics of this best strategy game in real time right on the TV screen. Many people decided that since the company Westwood Studios had produced such a miracle, you just have to act in the same style and then success will accompany you all the time. But is it? Maybe, of course, I'm too cruel, but there's nothing wrong in that I say that KKND: Krossfire exactly copies all the elements of the game that are implemented in Сommand & Conquer and does it without a single mistake. But it's because the game obviously lacks originality. It's not that the company is influenced by this style. In addition to graphic changes - of course, the game has other units, machines, landscapes and warring parties - KKND differs only in management. Which, by the way, is not as convenient as in Command & Conquer. If you are not afraid of vulgar plagiarism and lack of originality, it turns out that the game is very good, in it you can properly train in military operations. Just do not try to find any differences from Сommand & Conquer. The plot of the game is the following: after the nuclear Apocalypse there were practically no people left on the earth, only quiet peaceful Australia, according to which no one launched missiles, less escaped, so that people had maximum chances of survival there. In this case, there was a division of people into two categories - technocrats - Survivors, who more or less retained the human form, stayed in their strong bunkers, and also Mutants, who became the most deadly creatures on the whole planet, having passed the natural selection and radiation test - those who survived the hard gamma radiation is unlikely to scare bullets. Between them unfolds a completely natural struggle for the resources left on the planet. The war is not for life, but for death, because the Survivors are afraid and hate Mutants who have completely lost human values ​​and appearance - you will not find them worse. While the Mutants hate Survivors, believing that they are the ones who are to blame for the catastrophe that destroyed humanity. Here is such a straightforward story, having its limitations - you will have to put up with them.