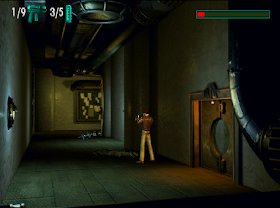 Before swap CD, save state to file, next CD, upload save state file.
Genre: Action, Adventure
Perspective: 3rd-person
Gameplay: Puzzle elements, Shooter, Stealth
Narrative: Spy / Espionage
Published by: DreamCatcher Interactive Inc.
Developed by: Revolution Software Ltd.
Released: 2000
Platform: PlayStation (PSX, PS1)
In 2000, the British company Revolution Software, which was noted for the wonderful quests Beneath a Steel Sky and Broken Sword, decided to keep up to date, namely, to give out a game suitable for both PCs and consoles, since the first Broken Sword games are amazing successfully sold on the PlayStation. The birth of this idea was the adventure film In Cold Blood.
Released game of special popularity did not win, what were the reasons - to break between the console gameplay and the classic quest failed. The funny thing is that eventually it is sold only on the PC. Plus - outdated graphics and uncomfortable management. Did not save even the plot of the militant, a dozen rollers and an exciting action. The company, in fact, was previously marked by the desire to make games with "earnest", approaching the cinematographic nature of the action. And if technically they managed to achieve this, then the plot of the game is golimy thrash thriller, slightly more than completely written off from any of the 90's bond.
So, the tie. British special agent John Cord, resting on the beach, should, on the orders of the head of Alpha, immediately go to the release of American agent Kiefer. Further history will be devoted to the harsh and mysterious post-Soviet state located on the territory of Siberia, which is proudly called "Volgia". The head of this country, Prime Minister Dmitry Nagarov (with emphasis on the first syllable) is planning insidious plans for the death of mankind. The group of Siberian guerrillas called "Fighters for the freedom of the Volgia", led by a hefty peasant named Gregor Kostov, opposes the dictatorship.
‹
›
Home
View web version