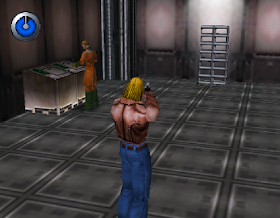 Genre: Action, Role-Playing (RPG)
Perspective: 3rd-person
Gameplay: Puzzle elements
Setting: Sci-Fi / Futuristic
Published by: Konami of America
Developed by: Konami Computer Entertainment Osaka Co.
Released: 1999
Platform: Nintendo 64 (N64)
Very ambiguous and strange game turned out, but it is possible to play it. I think at least it's worth trying, because Nintendo 64 has almost no role-playing games, and even such unusual ones.

The script is made in a science fiction setting and tells us about the struggle of people with certain hybrids of people and newcomers.
Initially, we are entrusted with the management of a strange person, similar to an Indian, who suddenly in an introductory video suddenly kills an agent of government services for nothing. At the same time, he also evaporates literally in front of his eyes, and then attacks his escorts, such people in black, and falls into the depths of an incomprehensible mine. Quite a strange beginning, in which little is clear, but further more. Starting to play for Diaz, that's the name of this guy, you, after passing through some corridors of a strange underground complex, turn off the security system with your own hand, thus opening all the doors for the monsters, the hybrids of people and newcomers imprisoned behind them. Next and until the end of the game under your control will be another character - Johnny Slater. He was shown in the opening video, only there was just a clone.
In the course of the story it becomes clear that the hybrids were created to enslave the Earth, by replacing all the key figures on our planet, including the US president, who was just at that moment in New York. Therefore, our task is to penetrate deep into this huge structure and stop the alien invaders. Along the way, we will meet normal aliens who do not wish us harm, but rather motivate the protagonist to save the human race.

As it was said at the very beginning, the game is a mixture of genres, in which there is a role-playing component, and fighting with elements of wrestling, and shoot with guns, too, will give. From the very beginning we will have a fuser - it's such a pukalka with a limited range of action, but it is quite suitable for shooting all sorts of drones in the corridors, besides with unlimited ammunition.
But we will bring down our main opponents-hybrids into melee. The fight itself will take place in a semi-step-by-step mode - both opponents will move along the 3D field. Your task is to retreat from the enemy to accumulate a scale of power and to hold a strong blow or a series of blows. If the enemy finally catches up with you, then there are three options for action: counterattack, try to block or try to retreat to the side. If we ourselves approach and attack, then we open a menu with a list of various techniques. The list of receptions will grow, as will the hero's parameters. To learn new techniques, you must often be substituted for the blows of each new enemy. Yes, yes, you did not misinterpret: only when the hero will feel the reception on his own skin, he will be able to learn it. But you need to be careful, because the adversary can break your arm or leg, which is fraught with big problems. Also during the fight, you can use inventory, which includes first-aid kits, various reinforcing and attacking pieces. All these items are scattered around the level in the drawers, or they can sometimes fall out of the enemies. Among the piles of corridors and rooms will come across special cameras in which we can make up for our health and record the game. In general, this is how the game process looks like.
‹
›
Home
View web version