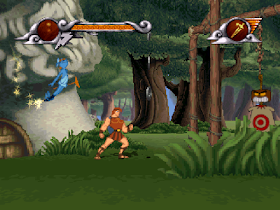 Genre: Action
Perspective: Side view
Visual: 2D scrolling
Gameplay: Arcade, Platform
Setting: Fantasy
Published by: Virgin Interactive Entertainment
Developed by: Eurocom Developments Ltd
Released: 1997
Platform: PlayStation (PSX, PS1)
This game is dedicated to the adventures of Hercules and his friends. You find yourself in a mythical world to free Hellas from terrible monsters. Try to use the power of Hercules, the ease and speed of Atlanta or Jason's resourcefulness. It is time to finish once and for all with one-eyed cyclops, Hydra, Medusa, snakes and skeletons. And the gods are good! All as one is some mad, so there is nothing to stand on ceremony with them. However, the developers of the game quite freely interpret Greek mythology. You will find in the game also nasty Martians, crazy clowns and other monsters not seen in Ancient Greece. Your means of protection and attack will be a quiver with arrows, a sling with a cobblestone, a weighty club. Houses on the streets can turn into reliable shelters. You can even throw people and animals: sheep, sheep and cows. Perhaps you will be lucky and help preserve ancient civilization such rare weapons as, for example, inflatable cows.

You can change the control method, but the one that is suggested by default seems to us quite convenient:
Square - kick, attack with a club;
X is a jump;
Circle - conversation with the characters of the game, the use of collected coins (when buying things);
Triangle - the use of force (for rapid running or lifting weights);
L1 - use of the chosen weapon;
L2 - choose the type of weapon (from your arsenal);
R1 - use of elements of non-combat inventory;
R2 - choice of other non-combat equipment (replenishment of energy, etc.);
Start - "pause", viewing the map, a list of keys and the number of coins;
Start / Select - the ability to exit the game, return to the main menu;

New Game - start the game from the very beginning;
Load Game - "load" the previously recorded game (only if there is a record card, and on it - "save")
Options - options that allow you to change the way you manage.

With the help of a weighty club you will deal with your enemies without any problems. If you have a quiver, you can shoot at enemies with arrows. You can rush garbage and scraps. You can throw a silver fork. Bombs are designed not only for the destruction of most of the enemy detachments, but also cool off the fish. Pieces of ice allow you to freeze the enemy and attack him without losing energy (better save them for the main "boss"). Hefty cobblestones, apparently in comments and advertising do not need. Lightning is an effective weapon of mass destruction. The pepper explodes like fire and attacks the enemy. A laser gun is very expensive and is extremely rare.