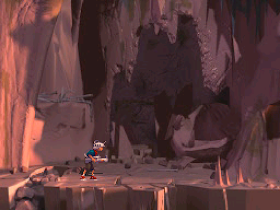 Genre: Action
Perspective: Side view
Visual: 2D scrolling
Gameplay: Platform, Puzzle elements
Published by: Interplay Productions
Developed by: Amazing Studio
Released: 1998
Platform: PlayStation (PSX, PS1)
Game Heart Of Darkness was developed about five years. It has become one of the platforms / logical games that inherits the traditions of games Out Of This World (Another World) and Flashback. The game has become a certain subgenre, in which there is not only a real adventure, characteristic of the Oddworld series of games, but also a lot of puzzles.
The story resembles a meeting between Steven Spielberg and Jim Henson. The boy uses a self-constructed ship in order to go to another world and save his dog, whom the mysterious Ruler of Darkness was abducted by some parallel world. After his ship crashed, he had to make his own way to the castle, where his friend was imprisoned.
Considering that along the way he meets various creatures monsters and monsters that devour children, as well as slippery spiders, terrible demons and all that, then they will have to fight with them. Mysteries, as a rule, consist in a certain sequence of actions that you have to perform on several different screens (the game is performed in a series of 2D screens, and not in the standard scrolling) and then go on. In general, they are very interesting to solve.
For example, first of all you will need to drag the roots of the killer plant (to pass it later). Then, you'll have to scare the terrible beetles so that they leave their nest, and you quickly climbed up to where the flies fly, as they scare off the plants. Each stage is given a certain time.
If you die or you are eaten (which happens quite often), then you will finish unraveling the first puzzle and you will not go any farther. If you are constantly being killed, then you will be shown a special video.
The game has a variety of puzzles; in some it will be necessary to run, jump in others, in some use all sorts of things found, and in others to shoot (from time to time you find or lose weapons), in the third you will climb up obstacles. All puzzles are very interesting, despite the fact that they rarely use CG animation.
All graphics are very beautiful, especially with regard to the drawn 24-color background, which runs through your character. All very nice, true, if you need, really, beautiful static visual effects, then you need to go to the Tretyakov Gallery.
Riddles are the best part of the game. Being a certain "relative" of Oddworld: Abe's Oddysee, Heart of Darkness has better-worked puzzles, although they are somewhat more linear. The game got into two compact discs, most of which is occupied by the CG graphics.

Our hero Andy owns two basic weapons, but can lose and acquire them in the early stages of the game.

With this weapon you start and finish. It is not so powerful, but very simple to use. Hold the finger on the trigger, i.e. on the Fire button and aim at the enemies. Very easy and convenient, especially when the Shadows are piled on the crowd.

This is power! You can get the plasma somewhere in the middle of the game. You can perform two types of shots. A normal shot will be more powerful than a pistol, but it is difficult to perform, since you need to execute a long button combination. And there is no time for this when enemies are on all sides. A powerful shot is executed by pressing and releasing the Triangle button. This is a very powerful thing, and kills almost any enemy with a single shot. It is very useful for the destruction of rocks, rocks and other obstacles that arise in your path. This shot also turns the bean into a sprouted stem, and the stem - again in the string bean.

These Shadows will not be able to kill you, just slow down the movement or even stop. To get rid of them, use the D-pad. Right-left and slow, reliable means.

Very nasty Shadows. They just pounce, grab and immediately start eating, without even washing their hands or you. FUU! It's better to kill them before they get there.

In practice, one and the same, only one Shadows attack from the ceiling, and others - from the ground. Hook up and immediately start hawating right along with the clothes. Aim more precisely and a quick fire.

Perhaps, these flying Shadows will be even dirtier. Throw in you fireballs, from which it is sometimes difficult to dodge. But it is not difficult to finish them off.

Spiders, probably the most annoying security in the game, such whistlers - it's just a sin not to shoot! And how they instantly shy away from your shots. Moreover, they still give off a hideous green slime, on which the legs part, like on ice. And on the rocks do not climb if you run into it.

Very unpleasant Slugs. They hide in the rocks, and when you get closer, grab, break the spine and drag them into their burrows. Very impressive. Usually a couple of shots carry them to shreds.

They throw up fireballs, as well as fiery jets, from which it is difficult to dodge. When you kill Garda, after him remains a couple of Lavrae on the ground. And if everything is left so, then two Gardas are formed from them. Arithmetic is not in your favor, so read the territory properly.

Servant is an exact copy of the cartoon character Raccoons. The cowardly whimpering type is the exact description of it. But he does not attack you at least.

One word is Master. He attacks you only at the end of the game (and thank God), using a powerful double ground fire attack. It is possible to escape from it only by very prudent double jumps. It's a pity, but you can not finish it off. That's it!
‹
›
Home
View web version