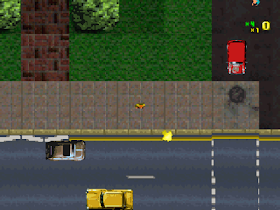 Genre: Action, Racing / Driving
Perspective: Top-down
Visual: 2D scrolling
Gameplay: Shooter
Narrative: Crime
Published by: Rockstar Games
Developed by: Rockstar Canada
Released: 1999
Platform: PlayStation (PSX, PS1)
GTA: London 1969 is the second game in the Grand Theft Auto series and the first addition to the game Grand Theft Auto, 1997. It offers 32 completely new missions, as well as a total of 30 new vehicles, corresponding to the time period. The game is very similar to the original Grand Theft Auto, because it uses the same game engine, and missions, cutscenes and game sessions are presented in the same form as in the original game.
The game takes place in London in 1969. The player again has to fulfill various missions in the role of a criminal, climbing the career ladder of organized crime. Temporary setting allowed developers to add to the game a lot of references to the culture of the 60s, including the appearance of a character reminiscent of James Bond and the use of characteristic jargon. In the dialogues GTA: London 1969, you can find such memorable phrases as "Oi, stop right there!", "You're nicked!" And "You're brown bread!". And of course, the game respects the left-hand traffic adopted in the UK.

After the release, Grand Theft Auto: London 1969 received mixed reviews of critics. On the GameRankings website, which shows the average rating of the game as a percentage of 100, estimated the version for Microsoft Windows at around 75% based on nine reviews, while the ported version of the PlayStation add-on scored 69% based on eleven reviews.
In the main, the addition was seen as something that made minor improvements to the original Grand Theft Auto game. Jeff Gerstmann (Russian) English from GameSpot noted that the game "can still be quite fun," but came to the conclusion that "in fact it is not within its power to compete with the three original GTA cities." Ron Doolin, also from GameSpot, found that "GTA: London 1969 has not so much new", except for purely cosmetic changes, but "all the game problems [from the main game] have remained." He criticized the lack of development of the game, citing "poor management, disappointment in the design of missions and mediocre graphics." The reviewer from Eurogamer confirmed, saying that "like the original game, it does not look very good. Graphics has a high degree of pixelation, and scrolling the image is not smooth and not the most pleasing to the eye. " In a more positive review, Jay Baer from IGN stressed that "GTA: London 1969 has 36 new missions, 30 new cars and most importantly, unlimited opportunities for criminal activities," although he acknowledged that "the open-world gameplay is in fact Do not force you to do something different [compared to the original GTA]. "
In contrast to the aspects of control and visual component, the sound in the game received general positive feedback. Doug Perry of IGN, recognized "the most attractive in GTA: London, it's her faithfully transferred retro music of the 60s." Jay Baer agreed, saying that "the soundtrack creates a stunning London atmosphere", and in the Eurogamer review it was said that "excellent music" is what "adds to the game of pluses."
‹
›
Home
View web version