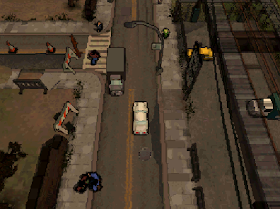 Genre: Action, Racing / Driving
Perspective: Top-down
Gameplay: Shooter
Interface: Direct Control
Setting: North America
Narrative: Crime
Published by: Rockstar Games
Developed by: Rockstar Leeds, Rockstar North Ltd.
Released: 2009
Platform: Nintendo DS (NDS)
Grand Theft Auto can definitely be called an icon of video games and the best game series with the open world. This is a real sandbox with a stunning design and history. Very few people managed to do something similar to GTA. Chinatown Wars all struck by what platform is being developed for the new part - the weak Nintendo DS. But Rockstar seriously approached the game.
Earlier Rockstar already made portable versions of GTA for PSP, which boasts a more powerful stuffing than DS. But the console "big N" has one very interesting feature - the second screen, which is sensory. It was on him that the developers decided to make an accent.
The main heroes of Chinatown Wars are the Chinese Huang Li (Huang Lee), who flies to Liberty City to deliver the sword to his uncle. Juan's father, the boss of the triad, was mysteriously killed, and this sword must pass from his possession to his brother. Upon arrival, Juan is waiting for an ambush, in consequence of which his sword is taken away, and Lee himself is thrown together with the car from the pier. The plot is standard for the series and without unexpected twists and turns.
The camera is isometric and somewhat reminds us of the first parts of the GTA, but the models here are 3D. The gameplay is completely different from the previous game of the series. It is close to GTA 2, but at the same time it is not like it. There is one significant innovation - to get rid of the persecution, we must ram police cars. A very interesting find that can return to the next GTA series.
The city was pumping from the "big" GTA (IV), with the exception of one island. The whole city is immediately open for exploration. Shops, garages and similar things are present. A lot of vehicles, you can even find a tank. Weapons are also enough: pistols, machine guns, grenades and so on. Shoot is convenient due to auto-targeting of enemies, but you can be guided by yourself with the help of "Shift". Management, by the way, is convenient. The hero instantly reacts to the button presses. And in the car the control is executed and at all perfectly - from driving you get pleasure.
In Chinatown Wars there is a smartphone, as in GTA IV. All control in it is carried out completely by the touch screen, you can mark a point on the map, see emails, order a weapon that is delivered to the nearest place of conservation. The phone in the game makes life easier with the search for drug dealers.
By the way, about drugs. This is one of the most important details of the new part of the GTA. In general, everything revolves around them. You buy the hind, and sell more. And for this you can really spend a lot of time. But the guards of the order are always on the alert, and if you are seen during a conversation with another dealer, chases can not be avoided.
And now a little more about the main feature of DS - touch screen. It has a lot of mini-games. If you decide to steer the car from the parking lot, you will need to turn off the alarm - cut the cords or enter the code. To break the gate, you have to break the lock. In the store you can buy a lottery ticket, the playing fields of which must be erased on the bottom screen. And these "tests" fill the game, giving it a certain charm. The only thing that is not very convenient is the throw of a grenade. To do this, click on the grenade icon and indicate the direction - a bit inconvenient ... It is worth mentioning the interesting use of a microphone - it serves to stop a taxi.
Music on the radio is presented in the form of short notes without words, as well as dialogs with cutscenes. Cinematic are made in the style of comics, which fits very well in the style of the game. All this was done because of the limitations of the console, but the developers did their best to fit a huge world into one cartridge. And the game manages to practically not slow down and only occasionally loads textures.
Any passed mission can begin anew in your "lair." By the way, for quick passage of tasks give awards (bronze, silver or gold). Yes, and this is just one example of what you can do after the campaign. As a result, the whole game takes about 20 hours, which is very decent for a portable game.
In multiplayer can come together 2 players. Available as standard modes "Everyone for himself" and the race, and an interesting "Capture the flag", in which the flag is a van with drugs. And it's worth mentioning holding the base, the mode resembles something DotA, but without intermediate towers. The task: to destroy wagons or buildings of rivals. In this mode, each of the parties have assistants (again, as in the above game), which, for the other hand, do not last long.
About this game can not tell everything, since it is really big, although it came out on a small console. This is still a huge world, both in area and in terms of pleasure. Grand Theft Auto: Chinatown Wars continues the legacy of GTA as the best "sandbox". With the move of the series to the portable platform, the series has not lost much, it even acquired new features. It's hard not to be amazed at what the developers have done on such hardware. GTA: Chinatown Wars is one of the best games for the Nintendo DS.
‹
›
Home
View web version