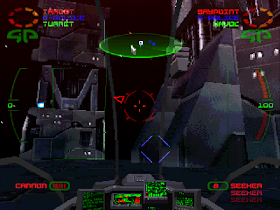 Genre: Action
Perspective: 1st-person
Gameplay: Shooter
Setting: Sci-Fi / Futuristic
Published by: Psygnosis Limited
Developed by: Psygnosis Limited
Released: 1999
Platform: PlayStation (PSX, PS1)
Futuristic anti-utopia, recalling in memory the dank streets of Blade Runner. This time at the disposal of players - five vehicles, each of which is managed in its own way. You are expected to 30 new missions and 25 types of weapons for the administration of justice - more than enough so that you and your team can clean the streets of different evil. Do not underestimate your enemies - they are insidious and prefer to attack gangs and even arrange ambushes in tunnels. The game is significantly improved in comparison with the first part of the game, it concerns not only graphics that became much better, but also controls - the developers included in the game support for the analog and Dual Shock. In addition, the game has become more accessible to the average player, thanks to responsive management and a more cleverly designed game scenario.