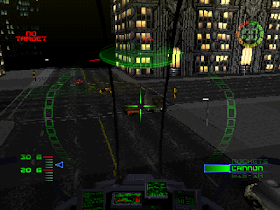 Before swap CD, save state to file, next CD, upload save state file.
Genre: Action, Simulation
Perspective: 1st-person, 3rd-person, Top-down
Gameplay: Shooter
Setting: Sci-Fi / Futuristic
Published by: Psygnosis Limited
Developed by: Psygnosis Limited, Wheelhaus
Released: 1997
Platform: PlayStation (PSX, PS1)
Game G-Police was developed specifically for the console PlayStation creators of the legendary series Colony Wars and WipeOut, later ported to the PC. You find yourself in the future, in a society where law and order are on the verge of total collapse. The player will become a real policeman to maintain calm among civilians, and also to put fear and horror in the vile souls of thieves and bandits. At your disposal will be a super-modern "gyrocopter", which flies over the streets of the city on a flying flight. Here the player expects a large number of interesting fights, filled with bright and colorful attacks, and all this is complemented by a magnificent 3D graphics.
2097 year. Callisto - is the second-largest moon of Jupiter. After the nuclear war that destroyed the Earth, people settled on the Jovian moon and fell into the hands of criminal corporations that governed the interests of the "cause." G-Police is created by corporations to protect the security of their territories from the intervention of mafia structures. They patrol cities on their flying HAVOC, act decisively and ruthlessly. And here is our hero Jeff Slater - G-Cop, Air Division. He has his own mission. His sister and colleague, also was a HAVOC pilot, but died under suspicious circumstances during the alert. And Jeff decided to find out how it was. It's clear that you are playing Jeff, which means that you are a HAVOC pilot and fly on an ION engine supercomputer. And his maneuverability, like a helicopter! Yes, weapons that need: from the super-gun Volcan Cannon to a fantastic plasma installation, as well as 100 kilograms bombs, smashing any house. But the policeman has no right to fly and shmaljat from guns to the right and on the left. So the work is difficult, and even the enemies in bulk. It is necessary to perform 35 missions (and in 3D graphics fantastic cities look very concretely!), And each mission is different. It's not just "go there, shoot everyone." As you move from level to level and master the technique of piloting and weapons, missions become more difficult; some you carry out even with ground services. An accurate situation analysis, calculation and quick response are required.
The game is done simply on a cinematic level, great plastic and animation, and how the characters' faces change! Space landscapes - just an exciting sight! Kinovstavki are like a part of training, they allow you to consolidate the game experience, and the hints and information you hear help you better understand the game situation.
What can you say about the gameplay? First, the flights are absolutely 3D and look particularly impressive among urban buildings. You can not only fly in any horizontal direction, but also up and down. Over the skyscrapers, you can soar so high that the surface of the satellite disappears from you in a quite plausible fog. Secondly, the enemies, which, I must say, hardly ever happen, in spite of the full 3Dity, it is not so difficult to destroy, because the management in the game is implemented extremely successfully. It is only necessary to practice a little in missions specially designed for this - and you will necessarily feel like an ace. Graphically, G-Police is a game that, if not revolutionary, is, at least, very unusual. So great graphics in the 3D game on the PlayStation you just have not met. A beautiful drawing of polygons, cool textures, explosions and a variety of lighting effects create the impression of a game with unusual graphics. Even Colony Wars - a game, by the way, very similar - can hardly compete with G-Police with its graphic design and effects. I would like to note how well the developers have recreated the atmosphere of the city of the future. While you will defend justice in the battles with criminals, the life of ordinary people will go on in the streets of the city. Sometimes you feel a bitter vexation, discovering that you were shot just when you were watching a truck hurrying about your business. But in addition to trucks in the game is still enough to feel that the city is moving its normal life. In conclusion, let's say that we did not see many games of this quality so as not to pay attention to G-Police. The game is simply excellent and can count on a lot of fans. And if you still do not have G-Police, you should fix this error as soon as possible.
‹
›
Home
View web version