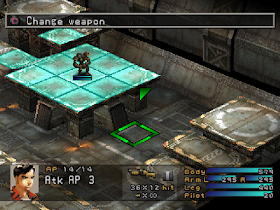 Genre: Role-Playing (RPG), Strategy / Tactics
Perspective: 3rd-person
Pacing: Turn-based
Vehicular: Mecha / Giant Robot
Published by: Square Electronic Arts L.L.C.
Developed by: Square Co.
Released: 2000
Platform: PlayStation (PSX, PS1)
In all there are about a dozen real strategic RPG games released for PC, and they can be quite worthy of being played. But Front Mission 3 is the only game I would put on a par with Final Fantasy Tactics as a must-play game to play for any fan of this genre. Basically, Front Mission 3 is so specific it makes it plausible. Well, of course, giant robots are running around there, but there are also tanks, military vehicles, helicopters, weapons that are universally recognized, and military vehicles. A realistic and detailed plot is also helping: the action takes place on Earth in the near future (in 2112, to be precise). As a result, you face the same type of political struggle you can read about in the evening news. This is a pleasant new change compared to the endless swords and witchcraft that overwhelm almost any other game of this genre. In addition to the rather large amount of time you spend holding a conspiracy, quite a lot of effort in Front Mission 3 you have to spend and on battles, which is also quite nice. The game will do a great job, introducing you into the system of battles and teaching you to control the situation and to resist the enemy in the most difficult battles. There is ample space for planning and strategic deployment of troops, for choosing attacks and balancing between the possibilities of attack and defense. However, they are never too much, so that the game is boring or seem monotonous. There are also many possibilities for building military installations and equipment with various equipment in accordance with your wishes. In addition, you can develop martial arts and special skills of your characters.
In fact, the only complaint that I can submit to Front Mission 3 is the lack of diversity in missions. There are more than enough scenes here (the game is huge), and the scenario leading to the battle is diverse and interesting, but too often the main goal is simply the destruction of all the bad guys. Several times you will meet other tasks - escape from the enemy military complex, capture of the enemy ringleader, etc., and these tasks, of course, inspire fear and reverence, I just feel sorry for having so few.
Description of the effects of the Anti-A, Anti-P and Anti-F options:
Anti-A (Anti-Impact Defense) Strengthens protection against melee attacks and shotgun shots.
Anti-P (Anti-Piercing Defense) Strengthens protection against missiles, rifle shots and stationary guns, as well as tank shells.
Anti-F (Anti-Fire Defense) Enhances defense against missiles and fire.