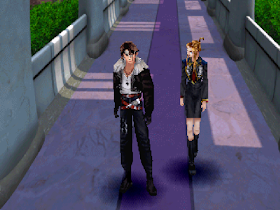 Before swap CD, save state to file, next CD, upload save state file.
Genre: Role-Playing (RPG)
Perspective: 3rd-person
Art: Anime / Manga
Pacing: Real-Time, Turn-based
Setting: Fantasy, Sci-Fi / Futuristic
Published by: Square Electronic Arts L.L.C.
Developed by: Square Co.
Released: 1999
Platform: PlayStation (PSX, PS1)
The main character of the game is a self-contained seventeen-year-old boy named Squall Leonhart, who is trained in one of the military academies, called Garden. The plot is based on the next season of exams at Balamb-Garden. The lucky ones who pass the exam the best, become members of the elite division SeeD, performing the most complex tasks around the world. Squall decides to try his luck and takes part in the trial. This is the tie. To say more would be to deprive you of the lion's share of the pleasure of passing the game. The main focus of Square did exactly on the plot, and it was he who became the object of the hottest disputes between the players. Many scolded him for lack of depth, and everything connected with the past of the heroes was called nothing but delirium. They liked the other plot very much, they defined it as romantic, beautiful, sometimes dramatic. And to say who is right is very difficult. It seems that you understand with the mind that some pieces of the story are really very reminiscent of nonsense, that there are a number of blatant holes and blunders in the plot. But still tightens so that you can not tear yourself away. I would call the script a game Hollywood, that is, designed for a wide range of players. It's up to you whether it's good or bad. But the plot will be revealed for many and many hours and start thinking about it not immediately after the start of the game.

A picture that surprised

The first thing that strikes the player, who started the passage of Final Fantasy VIII, is the graphics. Without a shadow of a doubt, we can say that Final Fantasy VIII is the most beautiful role-playing game on PS one. Unlike the seventh part, whose characters were executed in a super-deformed style, the characters of Final Fantasy VIII look like ordinary adults without any hint of disproportionate physique. And the surrounding world began to look somehow more customary, especially cities: ordinary streets, ordinary houses, unremarkable cars, buses, trains. Of course, in the real world, you can hardly find their prototypes, but, nevertheless, all these objects look familiar, as if he had already seen them a thousand times. And what is surprising, for all its custom, the game world remains beautiful and attractive. And who said that the ordinary can not attract attention to itself? Maybe as much as he can. Final Fantasy VIII serves as proof.
But the most amazing video and special effects. And if while watching the first one you simply enjoy the highest quality of graphics and excellent direction, then when you call the custodian (about them below), you can easily lose your speech while on the screen everything explodes, flashes, somewhere rises and falls back. At the same time, the same thought in the brain is constantly circling: is it really possible on my old PS one? Neither the heroes themselves, nor the monsters, nor the guardians suffer from angularity and are perfectly animated. Suffice it to say that every bitten monster is not just disappearing somewhere, as it was in the early parts of Final Fantasy. Before death, some quaintly wriggle, others languidly sink to the ground, others, frozen for a moment in the air, fall dead dead. Do not think, I'm not a sadist, just made it so cool and so realistic that I wonder how I did not pay attention to such seemingly trivial things. The only puncture was with the faces of the characters. They look somehow unnatural, especially noticeable when the camera takes a close-up. But this shortcoming quickly ceases to pay attention.

And you stocked up with magic?

With the gameplay, unfortunately, not everything is as clear as with graphics. Let's start, perhaps, with the magic system. There is no MP in the game. Absolutely. Spells are now measured in "pieces". Sounds good? So I think it's bad. Magic has evolved from something mysterious, supernatural into an ordinary "object" used by the character in combat. The only exception is that you do not need to search for these "items" in the "Item" menu item, but in the "Magic" item. And you can dispose of magic as ordinary objects, for example, to give a part of the spells to another character of your team. In order to use magic in battle, the help of custodians is necessary. Guardians (Guardian Force, or abbreviated GF) are mystical creatures that guard their master and give him a number of interesting abilities, which include the use of magic. By the way, to use ordinary things, like a healing potion, the keeper also needs help. And it's not funny: why you can not get into a bag with useful belongings, without having GF, I'm totally incomprehensible. Without GF, the character in general can do nothing during the battle, but how to attack the enemy with his weapon. There is not even a standard command Defend.
Another unpleasant moment associated with magic, is how you can get the coveted spells at your disposal. There are three ways: draw them from a magical source, from enemies during a battle, or take advantage of the ability of curators to turn objects into magic. Given that the last possibility is still to be learned, and the items needed to get somewhere, you can make an obvious conclusion that you will have to use the first two methods at the beginning of the game. And if to be absolutely exact, most often it will be possible to apply the second method. This process is incredibly long and boring, to extract the maximum amount of one spell (100 pieces) takes at least ten minutes of itself, that is, real time, which could be spent on much more pleasant things. "Why do we need one hundred identical spells? Are not a couple of dozen enough for further exploits?" - the dumbfounded reader will ask. "No, not enough" - I sadly answer him. The fact is that the main use of magic is not in combat, but in improving the characteristics of the characters. On any of them, be it power, defense or speed, you can "hang" the spell, thus improving the performance of your heroes. And to achieve at least some noticeable growth of these indicators, spells must be very much. So it turns out that the player is literally forced, like a vampire to regularly suck out new spells from enemies.

He will always save you from dangers.

The combination of magic is by no means the only skill that can be taught to the guardian. Each of them can carry up to twenty-two abilities, and in order to learn any of them, you must earn a certain amount of Ability Points (AP), issued after each fight. Abilities can improve the characteristics of the character or the guardian himself, add new commands used both during combat (stealing items from the enemy, for example), and outside it (turning objects into spells). The Guardian can be summoned to aid in battle (analogue to Summon Magic from Final Fantasy VII), and this process can be repeated an unlimited number of times. In general, very useful little animals these GF. The only danger is that during the call, the guardian can be killed ... Each keeper has a certain amount of HP, and the amount must be carefully monitored, so that at the most crucial moment, your warder does not glue the fins and deprive you of all the bonuses he gives them . If such a misfortune does happen, do not worry: the keeper can easily be revived with the help of a specially designed object. With GF, however, there is one unpleasant moment: the animation of their appeal can last up to two minutes! Without the possibility of disabling it or at least reducing it. Believe me on the floor, viewing for the tenth time in a row, even if a very beautiful two-minute animation is pretty tiring. Yes, so that soon you simply refuse to call GF in favor of conventional weapons. Let such an attack is a little weaker, but it takes much less time to destroy the enemy.

Maybe in the cards?

Those who played in Final Fantasy VII, remember how rich it was not story quests and various mini-games. Quests in Final Fantasy VIII have become more complex in a puzzling plan, that someone will certainly like, but the mini-games have almost completely disappeared. Do not rush to scold Square, their place was taken by one, but very interesting, card game: Triple Triad. You can play it with almost anyone. In case of your victory, a certain number of opponent's cards are transferred to your collection. What happens in case of defeat, I think, is so clear. Subsequently, maps using GF can be turned into useful items. Some people can win unique, existing in a single instance, cards with the image of heroes and custodians. The deeper you dive into the world of Final Fantasy VIII, the more rules the Triple Triad will have, and the more difficult (and more interesting) it will play.

In conclusion, I will say a few ambiguous points. First, monsters grow in level with you. Thus, Square tried to free the player from the pumping of characters. And it almost succeeded. The only useful thing you can take out of the battlefield is AP points and items. Money from monsters is not (money heroes receive periodically in the form of wages for military merit), the experience can be regarded as a pleasant addition. As a result, the game noticeably lost in complexity: it's absolutely impossible to get stuck anywhere except for the final boss.
Another thing that facilitates the game is that the limits have become too easily accessible and too strong. It is enough to reduce the number of HP character to a critical value, and he will shparit limits almost every turn, leaving no chance for the opponent to win. Secondly, the game removed all the equipment, except weapons. There is now no chain mail, no helmets, no accessories. Weapons can not be changed either, but they can be upgraded. To do this, you need to find the necessary items for the upgrade and go to Junk Shop, where for a symbolic fee to make improvements. Thirdly, the number of commands that can be added to the character's combat menu is limited to three points. Almost with 100% probability, two places will be occupied by the GF (call the curator) and Draw (pulling spells from enemies and magical sources). Only one item remains vacant, and dozens of abilities. As a result, a number of interesting, but not paramount opportunities are not in the works, which can upset many players.
Final Fantasy VIII, probably the most controversial at the moment (at the time of writing the article, not at the time of its current publication - ed. Ed.) Game series. Too much innovation has brought Square into the gameplay. And to find out if you have new ideas to your liking or not, you just need to play it, no matter how trite it sounds. But if you like it, you'll get 50+ hours of pure pleasure. It will take so long to get through the game from start to finish. It is worth trying, is not it?
‹
›
Home
View web version