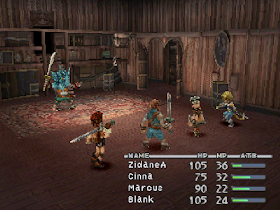 Before swap CD, save state to file, next CD, upload save state file.
Genre: Role-Playing (RPG)
Perspective: 3rd-person, Bird's-eye view
Art: Anime / Manga
Pacing: Real-Time, Turn-based
Setting: Fantasy
Published by: Square Electronic Arts L.L.C.
Developed by: Square Co.
Released: 2000
Platform: PlayStation (PSX, PS1)
This story was heard by many, but not a sin and repeat. In 1987, the samurai of the Japanese igroproma Hironobu Sakaguchi was going to make hara-kiri to his career as a game designer, and at the same time Square studios. He called his swan song "The Last Fantasy," meaninglessly hinting that it would all end there. But, as they say, marketing involves, and the target audience has. For the past almost 30 years Final Fantasy has managed to be a legend and a failure, games and films, role-playing sagas, action games and even rhythm arcades. And she's always coming back ...

How is it played?

Long before the advent of assassins, black operatives and races on machines with nitro accelerators, the developers realized that their children can be linked in the series not only with the plot, but also with the gameplay. It seems that you do something new every time, but like and familiar name attracts a loyal audience. If only the game remained recognizable. Final Fantasy - has become a pioneer of this approach. Always JRPG, always common elements, but at the same time is always an independent exciting story, a new world and new same heroes.
For the crucial part for the franchise, the seventh part was followed by an equally bright eighth, and then the ninth appeared. Final Fantasy IX is considered the most successful chapter of the series on PSone, but at the same time it - almost the only one of the entire line - has never been reprinted. Everywhere the enthusiastic reviews of the press were side by side with reservations and remarks, and the fans split into two camps - those for whom Final Fantasy started with the "Nine" and those for whom it ended. Square Enix focused on Final Fantasy X and the possibilities of PlayStation 2, and then got carried away by experiments, and the creation of Hiroyuki Ito went to the dustbin of history.
The stumbling block, oddly enough, was the return to the roots. The first Final Fantasy were role-playing and fantasy - with a classically primitive (or primitively classic?) Story about the battle of homegrown heroes with some obvious evil. Final Fantasy IX was the same - a story where the main role was assigned to a tailed thief-boy traveling in a company of friends, among whom, naturally, was a beautiful princess, and a brave knight and a couple of local clowns. But spoiled by the seventh and eighth releases, players were waiting for drama, gloom, social problems and global disasters. And they got a fairy tale about how friendship overcomes evil in green meadows and under a bright sun.
But enough history, it's time to discuss the gameplay. Japanese rolevki have almost nothing in common with, for example, The Elder Scrolls or Fallout, which come to mind when mentioning RPG. Yes, they have pumping - where without it? - but it is often automatic, the number of available items is strictly limited, and the combat system is reduced to step-by-step or pseudo-time-timed team battles. JRPG features elaborated to the smallest subtleties of history, bright and memorable, but in advance predetermined by the developers characters, as well as the most important element - random battles (situations where battles automatically start at random intervals regardless of the player's actions).
The magic world of Final Fantasy IX is called Gaia, and in the center of the plot of the game is the confrontation between states and peoples living on local expanses, as well as transparent hints of an outlined global message about the unity with nature and the harm of technology. The starting point is the kidnapping of the young Princess Garnet by the noble thief Zidane - an adventure in which almost immediately too much goes wrong, and as a result, the events are twisted into a whirlwind that most modern series can only envy.
Remember, like any Final Fantasy, "Nine" is 50-60 hours of campaigning, and if you want to find all the secrets - and all 100. Most of it will take place in the dialogues and the aforementioned random battles that happen in FF9 in real time, and the sequence of moves is determined by the initiative strip. In addition, the character who received a certain amount of damage falls into the "trance" and for a while begins to be particularly successful in giving shots to opponents. By the way, one of the modifiers of the new version of Final Fantasy IX allows you to simply turn off random battles to enjoy only the story. A brilliant solution, in fact.

How does it look?

So we came to the most interesting. If you carefully read all that is written above, you must remember one important phrase: Final Fantasy IX has never been republished before now. Yes, yes, Square Enix, which last years porting its titles for everything, there are in the bosom of projects that keep their faithfulness to their native platform. But why are we? And to what do you know, what is the native resolution of PSone? 320 by 240 pixels. This, for a second, 1/12 part of the screen of iPhone 6. Did you realize this horror? All other remakes coming to the mobile format were made with PC versions or with builds for more modern platforms. Let's not hide, at the start of pocket Final Fantasy IX on the heart scrapers cat fears ...
It's true they say, once a year and a stick shoots. For Square Enix, this shot was a mobile version of Final Fantasy IX. Someone misunderstood, someone unvalued, someone infinitely beloved game got a ticket to a new modern life so that this example can be entered in the textbook. Comprehensively updated graphics, radically increased resolution, new effects and filters are just the tip of the iceberg. The control scheme of 15 years ago was scrupulously adapted for touch screens, and the interface was completely redrawn. Cherry on the cake is a natural now, but the previously impossible function of autosave. In addition, the new version has a built-in system of achievements and seven activated modifiers, including endless money or disabled random battles. A dream and only ...

Unfortunately, in recent years the reputation of the reissues of the old projects has significantly deteriorated. After all, it's true, it's much easier to make nominal improvements and to release the former masterpiece once again on sale, having gathered cream on the nostalgia of the fans. Fortunately, Final Fantasy IX was an exception. This is an example of how to make re-releases. The one that is worth striving for. It is probably no exaggeration to say that it looked better only if it was recomputed from scratch. And this is a huge achievement.
‹
›
Home
View web version