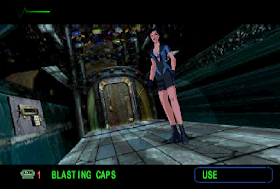 Before swap CD, save state to file, next CD, upload save state file.
Genre: Action
Perspective: 3rd-person
Gameplay: Puzzle elements, Shooter, Survival Horror
Setting: Sci-Fi / Futuristic
Art: Anime / Manga
Published by: Eidos Interactive
Developed by: Kronos Digital Entertainment
Released: 2001
Platform: PlayStation (PSX, PS1)
After the amazing adventure game Fear Effect, the Eidos and Kronos companies joined their efforts and decided to continue the story of the journey of Dec, Khans and Glas, and the Rhine. For those who have never played in Fear Effect, the game provides mixed actions, puzzles and a story in the course of the game (and it in fact went on sale on four CDs). The game Fear Effect has a lot of offscreen characters, which are described in detail so that you become aware of what was in the first part of the game. The game begins with the scene where Hana and Raine make their way through the water pipe, which, I must say, is filled with something unpleasant. In the game often there are horrifying video scenes, like - rats eat guard droids, unknown creatures make traps, and Rain sometimes gets involved in a real carnage, in which even the droids do not survive (or still survive?). Between the next bloody scenes, you will meet many puzzles, which, however, you can skip and move to others. As in Fear Effect, in this part, the plot was strongly influenced by Chinese Philosophy. And for just the deployment of events, Eidos can easily get 10 points out of 10.
In the second part there are three main characters:
The new star was Raine Quinn, a close friend of Hana.
Playing, you can pay attention to the new graphics, which appeared in the second part of the game. You can travel to several cities, each of which corresponds to a game disc. Among them there are Hong Kong, Hell's Kitchen (New York), Stan Xian City, the lost Tomb of the First Emperor of China and the mountain island inhabited by the immortal, Penglie Shan. In fact, the game has eight unique seats, which is twice as many as in the first part.
In the course of the adventure, you will learn how each of the characters meets with each other, as well as where the "evil" sister-twin Rhine, Mist, taking part in the most dangerous battle takes.
The game uses Motion FX3D technology (streaming technology). Kronos was able to make sure that all levels were loaded initially from the CD, which reduced the known problem of a long download on the PlayStation.
Improvements: more than 120 minutes of various scenes, carefully generated by the computer, 800 camera locations appeared (to achieve this, it was necessary to make the cameras more accurate!), The loading time was reduced. It should be noted that the real-time system was improved, four characters (including the Rhine) appeared, about 60 new enemies, and finally, there are caches that you can open, playing, again and again.
Team Kronos took more than a year and a half to finish the game. Therefore, despite the fact that the game was scheduled for release in the fourth quarter of 2000, it was able to be released only in February 2001. However, during this time the interest in the game was not lost.
‹
›
Home
View web version