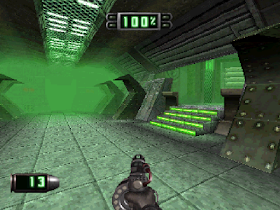 Genre: Action, FPS
Perspective: 1st-person
Gameplay: Shooter
Setting: Sci-Fi / Futuristic
Published by: Universal Interactive Inc.
Developed by: Insomniac Games
Released: 1996
Platform: PlayStation (PSX, PS1)
Disruptor - another version of the game in the spirit of the famous game Doom.
The existence of the United Commonwealth of Peoples of the Earth is under constant threat from renegades, mutants and terrorists. The protection of world democracy is expressed in the form of 13 missions that you have to overcome. So dear owners of PlayStation have come and it's time to show what we are capable of and not for nothing we eat bread. Missions vary greatly, including even sections in the open air, where all problems with the image of the horizon are solved with the help of a haze effect.
The historical background of events is revealed through video fragments and cute interludes that entertain you between the missions. The first five training missions can be completed without any problems. During this time, you will have time to master the technique of movement, shooting, and also practice using the energy capabilities of the characters. A large amount of energy is expended on the incineration of enemies, but there is also the opportunity to restore it after the battle. Your arsenal consists of a phase gun, an automatic pistol, a plasma spear, a self-guided gun, a powerful weapon called the "Cyclone" and about the same number of other death game names. In addition, you have paranormal abilities and are able to incinerate the enemy with mental attacks, as mentioned above. In the first battles you have to fight with small companies of stupid androids and flocks of giant flies. Soon the game will become more complicated, you will get to the levels consisting of several sections connected by lifts. There are several ponds and platforms, through and to which you can jump. In the game Disruptor you will not have the opportunity to shoot everything indiscriminately, as the game concept boils down to austerity of ammo / energy. Artificial intelligence of enemies is not very perfect and manifests itself in the greater part only during the chase. Sounds play an important role in this. So, the sounds of footsteps and even groans are a warning for you. Disruptor - very neatly made game with a lot of graphical bells and whistles and a variety of organization sections. The only drawback of the graphics and movement mechanism is that you can not look neither down nor up and as a consequence, you do not notice the foes leading on you.