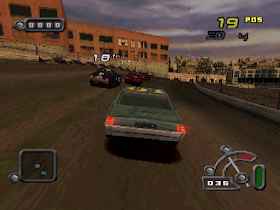 Genre: Action, Racing / Driving
Perspective: Behind view
Gameplay: Vehicular Combat Simulator
Vehicular: Automobile
Published by: Midway Games
Developed by: Studio 33 (UK) Ltd.
Released: 2000
Platform: PlayStation (PSX, PS1)
The last released on the PlayStation part of the glorious series Destruction Derby differs from its predecessors with a greater emphasis on colorful accidents than on skillful driving. But this circumstance does not spoil the game at all, but only adds glow to the struggle for leadership. Improve your performance from check-in to check-in, crashing someone else's cars in the most incredible way. And when the standard modes become boring, you can try to win in the car slaughter on the roof of the skyscraper, remaining the only owner of another "live" car! In this game there are several modes in which you can fight with rivals on the tracks and sometimes it does not matter if you come first or last, most importantly, destroy as many of the rivals cars and at the same time do not lose your car yourself.