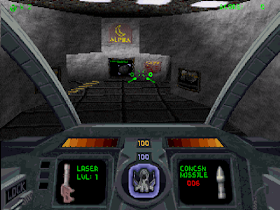 Genre: Action
Perspective: 1st-person
Gameplay: Arcade, Shooter
Setting: Sci-Fi / Futuristic
Published by: Interplay Productions
Developed by: Parallax Software Corp.
Released: 1996
Platforms: PlayStation (PSX, PS1), DOS
You serve as a pilot working for Post Terran Minerals Corporation. This powerful company extracts from the depths of several planets of the Solar System rare and absent minerals on Earth. Almost all the work on extraterrestrial mines is performed by robots. The number of people involved in the development of minerals is minimal. Unfortunately, an eerie computer virus subordinated the robots to itself, as a result of which the company lost control over them. The virus that originated in the most distant mine inexorably approached the Earth, where it can cause countless destruction. It was not possible to repulse the mines. There was only one way out - to send a pilot (that is, a player) who would penetrate the mines and destroy the rebel robots, blowing up the central generators. But first you need to save those who are still alive. The company gives the pilot the best fighter and gives the opportunity to choose additional weapons and ammunition.
The player must conduct his fighter through the labyrinth of mines, destroying the infected robots and searching for three things: people hostage to the virus, generator and emergency exit.
In Descent, the player has absolute freedom of movement. The ship can move in three planes, forward, backward, glide horizontally or vertically, can take off, descend, move left or right without rotation and even whirls around its axis. Infected robots move also, so that the enemy can be anywhere. Back in Descent, a very handy automatic map, with which you can sharply take off, sit down, and watch the level picture from any angle. This is especially true at the huge recent levels. There you must know where you are, where you have already been, and where you have not already.
The graphics and sound in the game are excellent, and what's even more amazing is the intellect of enemies. They are constantly cunning, gliding around, gathering in groups and attacking from all sides. 30 levels, gradually becoming more complicated by the end of the game, can hold you in suspense for a long time. Unfortunately, the more freedom of movement, the more difficult the control and control system becomes. In addition, the game can become hopelessly confusing, if you do not try to avoid disorientation.