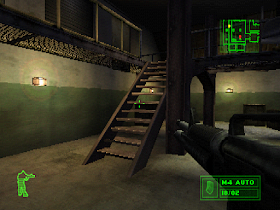 Genre: Action, FPS
Perspective: 1st-person
Gameplay: Shooter
Interface: Direct control
Setting: Contemporary
Published by: NovaLogic
Developed by: Rebellion Developments Ltd.
Released: 2002
Platform: PlayStation (PSX, PS1)
Definitely in this game you need to play. The game came out already at the end of PSX life and immediately became a hit, and all thanks to a rather original gameplay (or rather, in the era of lack of good FPS on the PSX and the same type of shooters - then suddenly a surprise was waiting). When you start playing, you will immediately be surprised how every detail is worked out in the game - for example, detailed weapons, physics, player movement, sensitivity to your environment - you can not just run around levels, you have to hide, clean up corpses and save ammo, Do not shoot again.