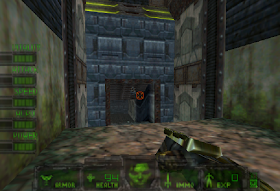 In the game 4 episodes, and 24 large levels, divided into locations (total in the game 62 locations). The first episode takes place in Japan in 2455, the second in ancient Greece, the third in Norway, the fourth in San Francisco in 2030, where the game ends. The game is not just the task of "kill them all." In the game you must constantly monitor your allies and solve puzzles. In the event that at least one of the allies dies, the mission fails. In the game, 25+ weapons, 6-7 for each episode.

It all begins with the fact that the protagonist Hiro Miyamoto, the master of swords, comes to the poor Toshiro Ebihara and tells him the legend of the great sword called Daikatana, made by his ancestor Usagi Miyamoto (who gave him the opportunity to move in time and space), by order Osaka Mishima (his descendant, Kage Mishima, is an antagonist in the game). Osaka Mishima wanted with the help of this sword to destroy the clan of Ebihara, who fought with him for 150 years. (Osaka kept Japan in an iron grip, and the genus Ebihara wanted to overthrow the clan of Mishima from the throne). But, having learned about Mishima's plans, Usagi gave Daiqatan into the hands of Insiro Ebihara, provided that after the overthrow of the clan, Mishima Dyikatana was returned to him. Having overthrown the Mishima clan, Inziro fulfilled his promise, and Usagi, realizing that Daikathan was too dangerous in the hands of a mere mortal, threw his sword into the mouth of the volcano.
However, the irreparable happened. Toshiro Ebihara, when he was rich, found a sword, but Kage kidnapped him before Toshiro could try it, went to the past, more precisely, in 2030, and stole a medicine against MMP, which was developed by the ancestor of Toshiro-Tatsuo, and appropriated it to himself. Since then, Mishima became rich, and he began to rule Japan (if not the world). Toshiro asks Hiro to take Daiqatan from Kage, and to save his daughter - Mikiko. However, during the conversation, two assassins attack unarmed Hiro and Toshiro, deafen the first, and kill the second. Hiro decides to save Mikiko and goes to the fortress of the Mishima clan. Along the way, he rescues a former security officer, Johnson Superfly, who helps him find Mikiko. Finding Mikiko and Daikatanu, they were about to find and kill Kage, but it turns out that he has a second Daikatana, created in an unknown way, and he sends them to the past, to be exact, to Ancient Greece.
‹
›
Home
View web version