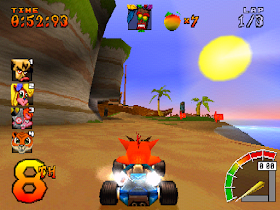 Genre: Racing / Driving
Perspective: Behind view
Gameplay: Arcade, Vehicle Simulator
Vehicular: Automobile, Track Racing
Published by: Sony Computer Entertainment America
Developed by: Naughty Dog
Released: 1999
Platform: PlayStation (PSX, PS1)
Following the contract with SONY, Naughty Dog developed the final game in the series (after the series of Crash Bandicoot worked already other developers). This game was Crash Team Racing that, in general, it is no wonder, in the second half of the 90s almost all the developers tried to transplant the popular characters into the racing chair. Our charming Crash Bandicoot and his company need no introduction. Everyone already knows that this "unknown little animal" (bandits, in general it's animals that are found in Australia), has become an unofficial branded mascot of the PlayStation (the same as Sonic the hedgehog for SEGA or Mario for Nintendo).
Crash Team Racing - arcade racing on miniature cars in the gaming world, borrowed from the main games of the series. You sit behind the wheel and rush forward, picking up useful items along the way, and skirting the objects that are harmful. Among the useful items, the most useful is definitely a weapon with which you can make various dirty tricks on the track. And from the harmful, the most harmful boxes with trinitrotoluene (explosives), already had time to patience nerves for the first three games. Carnivorous flowers, standing along the edges of the road and so and strive to swallow your zazevavshuyusya cars and other annoying obstacles that stand on the way to the finish, bring in the game a lot of additional interest.
‹
›
Home
View web version