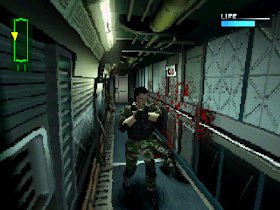 Before swap CD, save state to file, next CD, upload save state file.
Genre: Action
Perspective: Behind view
Gameplay: Puzzle elements, Shooter, Stealth
Published by: Activision Publishing
Developed by: Sugar & Rockets, TYO Entertainment Inc.
Released: 2000
Platform: PlayStation (PSX, PS1)
As a NATO soldier dropped on a captured train, you have to become a thin line between the world and the nuclear holocaust. In your arsenal before going on a long journey, except for artificial skills, there is a rich selection of weapons. Destroy enemy helicopters, boldly engage in fierce fights one on one on the slippery roof of the train, avoid high-tech traps and you can disrupt the terrorists plan to deliver the detonator of a nuclear bomb.