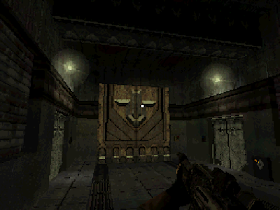 The story begins in 2028, when a massive meteorite impact occurs in California, in the Mojave Desert. During the next two decades, an underground research center is built to examine the extraterrestrial origins and the strange effects that the meteor is having on the natural environment and the people who come in contact with it. The game takes place twenty years after the arrival of the meteorite on Earth, 2048, when all communications are lost with the installation of the nucleus. The Special Technologies Unit, an elite unit of the US Marines, is sent to investigate and reestablish contact. The player takes control of the sailor Jason Crane. Crane struggles on his way, through several levels, when most of his fellow soldiers are killed or mutated, including his captain. In the main laboratories, Crane discovers the ARG radiation, which is able to accelerate chemical reactions or slow them down to "almost nonexistent". Once Crane arrives at the command center, he finds and kills Colonel R. Nightley. Nightley then launches a self-destruct protocol and destroys the facilities. Crane is able to escape through the service tunnels and heads to a cave system. At the end of the caves, he encounters the meteor that crashed twenty years before. Their weapons are absorbed by the meteor and Crane is teleported into it. The meteor turns out to be an alien spacecraft. Several of the occupants exit stasis and restore the energy to the ship. Crane however manages to destroy the core of the ship and escape. After completing the game, in an epilogue shows that Crane is watching as the alien ship rises from the earth. Next, it shows that there are thousands of other emerging vessels around the world. The game ends with a note that, "and so the war begins", which implies a possible sequel.

The multiplayer game mode allows players to play on teams with orange, green, blue or red colors. The game modes are team arena, team death combat, capture the flag, and free for all.

The game received generally negative reviews since its launch, and has a Metacritic score of 44/100 based on 16 opinions. Tom Mc Shea, writing for GameSpot, gave the game a 3.5 / 10 poor level design citing, control and combat.
‹
›
Home
View web version