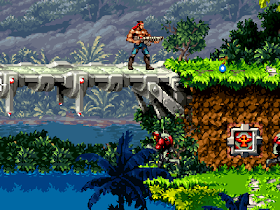 Genre: Action
Perspective: Behind view, Side view
Visual: 2D scrolling, Fixed / Flip-screen
Gameplay: Platform, Shooter
Setting: Post-Apocalyptic, Sci-Fi / Futuristic
Published by: Konami Digital Entertainment
Developed by: WayForward Technologies
Released: 2007
Platform: Nintendo DS (NDS)
Contra 4 is made in the best traditions of the series and uses many ideas from previous games. The game is made in full 2D and has 9 levels of two types. Six levels are made in the traditional for the series style - with a side view, among them there are transport levels. Three levels are made with a rear view - as a base in Contra. Gameplay Contra 4 is similar to Contra III: The Alien Wars.
Most levels are based on levels from the early parts (including Operation C and Contra: Hard Corps). The bosses returned and became more powerful. The musical accompaniment pleases us with both quality remixes and new melodies. In the game there is a voiceover of characters - phrases familiar to the previous parts ("Locked and Loaded!", "It's time for revenge," etc.). Voice acting can be turned off.
Before the game starts, you can set the difficulty level (the best ending is available only on Hard) and choose a hero - Bill Reiser, Lance Bean, Mad Dog or Scorpion. Five more heroes will be available after passing the test mode.
Because of the features of the platform, the action takes place immediately on two screens, located vertically and having a small gap, which can bring a lot of trouble when meeting with the game. The player can move between screens using a hook, allowing you to quickly move to a higher position. In 3D levels, the action occurs only on the upper screen, and on the bottom the map is displayed.
The weapon system is close to the Contra III - the player can use the same weapons (and another machine gun), acting a little differently, and the ability to have two weapons at the same time. All kinds of weapons shoot automatically. As in the Super Contra (Arcade), there is an opportunity to strengthen the weapon by taking it twice. You can throw one weapon and take it again. Instead of portable bombs returned bombs, instantly clearing the screen. In the test mode, there are new types of weapons.
Contra 4 can provide many hours of play. After passing the Arasade mode (available at the beginning of the mode, which has three difficulty levels, on which the number of levels and the end depends), the Challenge mode opens. In this mode, you need to pass 40 different tests of complexity, and this is worth it - the prizes are the possibility of playing Contra and Super C for NES, additional characters, interviews with the creator of the Nobuya Nakazato series, official comics on Contra 3 and Contra 4, listening to the soundtrack.

A set of weapons in the Contra 4 has absorbed all the main types of weapons from the previous parts. As in Contra III, a player can simultaneously carry two types of weapons and all types of weapons are automatic. As in Super Contra (Arcade), there is an opportunity to strengthen the weapon by taking it twice. The player can receive various bonuses by punching special containers and flying capsules in levels with side views or special enemies on the bases.

The game has the following arsenal

Two types of weapons are available only in the test mode

V Homing Missiles - Shoots five homing missiles, which often miss enemies. The rockets themselves are a reduced copy of the Vic Viper spacecraft from the Gradius series;
Classic Laser Gun - a classic laser from Contra and Super Contra, shoots short beams. This weapon has an interesting feature - with a new shot the already existing beam disappears, which allows you to keep the beam at close range to yourself.
In addition, in the first level, a player can use a funicular that allows him to safely overcome part of the level.

2638 Two years have passed since the invasion of the Red Falcon. Everything was fine, but the Black Viper unexpectedly attacked the Earth, and turned life into a living hell. Peaceful life turned into a distant memory, all the merits of saving the planet were quickly forgotten.
At this time, a strange signal was detected on the Galuga Archipelago off the coast of New Zealand. The best soldiers of the Earth (Bill, Lance, Mad Dog and Scorpion and Scorpion) were sent for the final blow ... which may be the last hope for humanity.
After the fierce battles, the Black Viper was destroyed.
‹
›
Home
View web version