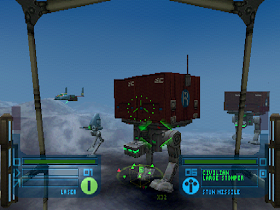 Genre: Action
Perspective: 1st-person, 3rd-person
Gameplay: Shooter
Vehicular: Space Flight
Setting: Sci-Fi / Futuristic
Published by: Midway
Developed by: Psygnosis Limited
Released: 2000
Platform: PlayStation (PSX, PS1)
The plot departed from the confrontation between the League and the Navy - the player took on the role of a mercenary named Valdemar. Initially, the hero sells his combat pilot skills to the League, the Navy and other organizations that will pay more. However, he soon encounters events that threaten the existence of the entire human race. Under the guidance of the mysterious General Valdemar travels through the star systems, unravels the conspiracy of the grim alien race of Sha'Har, which plans with the help of the mighty Red Sun ship to destroy humanity.
The final trilogy was not just a summing up, but the top of the series - the old elements were brought almost to perfection, plus the developers did not stint on the innovations.
The scheme of the game has fundamentally changed - the hero is free to choose tasks to his liking, buy new ships for the money earned and independently equip himself for battle. In every star system the player is waiting for a lot of job offers from a variety of legal and not very organizations. As well as it is necessary to the mercenary, it is possible without problems to take tasks from those whom in the last mission destroyed, - was not rancorous. True, the non-linearity of the plot, characteristic of the past parts, disappeared: the player had a choice only in additional tasks; for the movement of the plot, the fulfillment of key missions was mandatory, and no defeat was allowed.
The variety of tasks, which took place in space and on the surfaces of the planets, amazes - the banal "kill all" is lost against the background of other missions. What is the task, where necessary, with a cable attached to an atomic bomb, to fly next to it and shoot off obstacles so that the explosives reach the thick of the rebel ships and jerk. Also, the player had to hunt for space cows (similar to jellyfish) in the upper atmosphere, tow lifeboats drifting dangerously close to the star, and, of course, to blow up giant space cruisers. Subject missions were accompanied by high-quality videos. One can not help but note the amazing orchestral soundtrack - the music of Red Sun is worthy of standing alongside the Imperial March from Star Wars.
The game was much easier - with the necessary agility and quick shooting Valdemar easily destroyed the giant cruisers. Heavy can only be called fighting with Sha'har. Despite this, the Red Sun became the crown of the Colony Wars series.
‹
›
Home
View web version