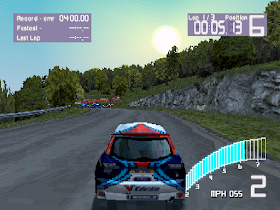 Genre: Racing / Driving, Simulation
Perspective: 1st-person, Behind view
Gameplay: Vehicle Simulator
Vehicular: Automobile, Off-roading, Track Racing
Published by: Codemasters Software Company Limited
Developed by: Codemasters Software Company Limited
Released: 2000
Platform: PlayStation (PSX, PS1)
Games in the name of which the name of this or that famous athlete is pronounced is very often met. But in the overwhelming majority of cases, the participation of these athletes in the creation is limited to the gracious consent to accept from the game developers a certain amount of money for using their name in the title of the game. Colin, in fact, took the most direct part in creating the dedicated game, he controlled the whole process of creating the game, striving to achieve maximum realism, to make the machine behave like a machine on a real rally in the game. And who knows better how the machine behaves there than Colin McRae. So Codemasters - the creators of the game have acquired a very valuable employee. Colin, for example, did not disappoint his friends from Codemasters in 2000, when Infogrames, the creator of V-Rally, sponsored one of the stages of the world rally championship. All cars participating in the stage were supposed to carry V-Rally 2 stickers on board. Kalin flatly refused to get into the car with such a sticker, and in the end insisted that his sticker be removed from his car.
Colin McRay Rally 2 develops all the strongest features of its predecessor. For the game, a unique physical model is created that allows you to achieve maximum realism in simulating the behavior of cars on the track, a new graphics core will make racing tracks extremely realistic and purely visual. In addition, the creators of the game, not without the help of Colin, got the real telemetry data from Ford Focus and included them in the game, as a consequence - this machine in the game is almost like real. Colin McRae Rally 2 eclipsed all other imitators of rally racing in 2000 - there's no doubt about it.
‹
›
Home
View web version