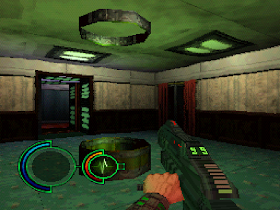 Genre: Action, FPS
Perspective: 1st-person
Gameplay: Shooter
Setting: Post-Apocalyptic, Sci-Fi / Futuristic
Published by: Psygnosis Limited
Developed by: Psygnosis Limited
Released: 1997
Platform: PlayStation (PSX, PS1)
You seem to be in a trap - an abandoned space colony, mutants and robots chasing you, a piercing voice sounds in your head - piercing the brain ... and your name is Tenka! A powerful weapon - that's all you need! Codename: Tenka is a great shooter! Not worse, perhaps, than Doom, Disruptor and Alien Trilogy! At all levels, and there are already 31 of them, you are expected to have intense skirmishes with aggressive enemies, artful shooting monsters, various devices that prevent you at all levels. However, at your service at each level up to nine types of powerful weapons (you can take three). An important part of your arsenal is beacons that can be placed along the way in the game, and then, using a special "tractor", again to track down. This is very useful for marking "icons", which should not be taken immediately, and which may be needed much later.
This game is interesting in many ways, and all its charms are revealed gradually in the course of the game itself. Perhaps, for the first time in it the idea of ​​a "multifunctional" weapon, replacing almost thousands of different types of weapons, was used. This is very useful in the game, although in practice it is hardly advisable. On the other hand, do not you want to wear a hard drive, a blaster, a rocket launcher and a grenade launcher at the same time, if you can get one thing that immediately replaces !?
Each stage of the game is a puzzle, for the solution of which it is necessary to find the keys (and the corresponding doors) encoded in different colors. In addition, at each stage of the game there are "secondary" puzzles, the search for solutions which adds intrigue and interest in the game.
Management can discourage you at first - it is difficult enough to learn to accurately aim (using L1 and L2), you will spend too much ammunition and make mistakes. However, very soon you will learn how to "give" monsters and mutants to the right and left. Adrenaline "excites" the blood, finger on the trigger, the enemies are scattered into tatters. That's why we love Tenka!

It all starts with a basic weapon that makes one shot every time you pull the trigger. And ends with a nightmarish "combine" carrying a host of all sorts of weapons, including deadly missiles. How does Upgrate (improvement) of your weapon to this level occur? Collect blue and green icon cubes, as they are lost by enemies. The more you collect, the wider will be the range of your Weapon. However, do not forget that for "business" you need more ammunition. Their location will show you the corresponding icons. So what can we do with luck to "include" in our "harvester" ?:
Great luck to find such a gift!