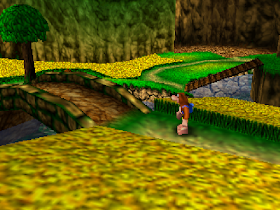 Genre: Action
Perspective: 3rd-person, Behind view
Gameplay: Platform, Puzzle elements
Interface: Direct Control
Setting: Fantasy
Published by: Nintendo of America Inc.
Developed by: Rare
Released: 1998
Platform: Nintendo 64 (N64)
The history of the creation of this project originates in the days of SNES. The English company Rare author of such hits as Donkey Kong Country and Killer Instinct led the distribution of another game called Dream. The concept of the game was as follows: a guy named Edison, armed with a wooden sword, gets into trouble at the will of Captain Blackeye and his gang of pirates. In the Dream project, the protagonist was to be helped by different animals, including a bear, which later became Banjo. The final version of the game was demonstrated to the public during the E3 in 1997.
The plot of the game is simple to impropriety. The evil sorceress (Gruntilda) kidnapped the sister (Tooty) of the protagonist, in order to exchange beauty with her. The protagonist of the lazy and dull bear Banjo and his assistant feathery wit Kazooie are sent to save his sister in the cave of the witch. Eventually, Banjo finds a sorceress and sister. Gruntilda promises to let the protagonist with his sister, if he answers the riddles of the game, otherwise the bear is waiting for the abyss with lava. After answering questions, everyone returns home for the holiday. The end is so? No. Tuti reminds his lazy brother that the witch is still very dangerous. The final battle begins, the witch falls into the abyss. The end is not it? No. Mignon Gruntildy finds her, the bear waits for revenge. Revenge will overtake him in the next part (Banjo-Tooie), which I do not have so that for me this is the end.
The gist of the game of the game is next you get to the cave of the witch and from there you choose the levels of nine. In order to open new levels you need to collect notes and pieces of puzzles. The concept of gathering is taken from Super Mario 64, it can be called a classic for 3D platformers. Collecting items is very cheerful and diverse, thanks to the huge levels, it's a pleasure to just walk around them. A local shaman can turn you into an ant, crocodile and even a pumpkin, there are magnificent flights on levels, racing. At each level there are several puzzles, at times even very difficult, but they are completely solvable. All this is flavored with excellent humor. It's worth paying some attention to the bird of Kazooie, not only that it wears, jumps, runs instead of a bear, shoots eggs from the ass (it looks not as criminal as it is written) and flies, it also sharpens up the heap (jokes are really funny, it winds up pleasant memories of Daxter).
Graphics at altitude. Large open spaces, moving clouds, shadows and perfectly made water and lava. Sometimes the mood spoils the camera, but very rarely, without spoiling the impression of the game. The sound is good, funny tunes and special effects are pleasing to the ear, but the voice acting is simply enraging. Every hero during the dialogue parades speech. It's so infuriating that I want to flip through the dialogues. In general, the technical design in places surpasses the Super Mario 64.
If you compare Mario 64 and Banjo-Kazooie, then it's not difficult to say who wins. The success of Super Mario 64 is not an accident, Mario is a talisman and the main person of the company, so the resources and efforts of developers spent more on it than on Banjo, which did not strongly depend on the image of Rare. Graphically, Banjo looks better, but nothing unusual can not surprise. The musical accompaniment in each game is on the same level, except for the silly dialogues of the bear. The game concepts are the same, although in B-K there are interesting innovations that have been used in Mario Sunshine (GC) and in other games, I mean the team-mate. But in general, Mario 64 looks better, thanks to a deeper developed world, thanks to music written by professional composers and of course thanks to Mario himself. In conclusion, Banjo-Kazooie is one of the rarest platformers proving that developers do not always need new ideas to create something more. If you liked Super Mario 64 it is worth playing in Banjo-Kazooie.
‹
›
Home
View web version