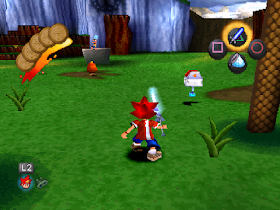 Genre: Action
Perspective: Behind view
Gameplay: Platform, Puzzle elements
Published by: Sony Computer Entertainment America
Developed by: Sony Computer Entertainment Inc.
Released: 1999
Platform: PlayStation (PSX, PS1)
You are participating in a small war, which is led by rebellious monkeys, which must certainly be pushed around the neck. These stupid obmomoty somehow managed to seize the time machine and now decided to go for different epochs, arrange a mess there too. Since you absolutely do not want to live in a world that is similar to the "Planet of the Apes", you have to fight with these travelers in time. The game developers helped you in this - opponents of the damned Banderlogov are two young guys, Spike and Buzz, assisted by their familiar professor who solves technical problems. They together go on business, having decided to capture these impudent images, damned primates who have conceived to destroy all world. All this sounds quite trite, you might think that you are waiting for a completely normal platformer. But this is not exactly the right opinion - when you start playing, it turns out that Ares Escape has an incredible control system, because it uses an analog controller to move through 3D landscapes and manipulate a huge number of devices and machines - for example, you will succeed to represent strokes when you guide a boat. The game will be very funny, you will have to torment wild monkeys on seventeen levels, scattered in time and space, the garb of all the characters change in accordance with the historical truth of each era, so that you will be able to look at very non-trivial costumes. So, for example, in the Ice Age you will see your hairy friends wearing winter fur coats - it's so comical that you can lose. In addition, the scene also affects how your characters move, so when you get to ancient China, all your monkeys will already know a bunch of Kung Fu techniques and so on. In order to make it easier for players to catch gibbons and baboons, you will get a huge number of devices for capturing primates, tools are quite difficult - starting with the slings and radio-controlled machines, tanks and radars, which track monkeys. With regard to the passage of levels and the connection of successes with the capture of monkeys, in each area you have the opportunity to choose one of the two types of passage levels - Cleaning or Passage. The exit from the level opens after you manage to catch a certain number of monkeys, but those players who are experienced enough to catch the whole company will receive a reward, getting to one of the three secret prize games. Ape Escape has turned out to be quite an impressive game and has received many sequels on various platforms.
‹
›
Home
View web version