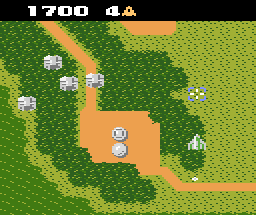 Genre: Action
Perspective: Top-down
Visual: 2D scrolling
Gameplay: Shooter
Setting: Sci-Fi / Futuristic
Published by: Atari Corporation
Developed by: Namco Limited
Released: 1988
Platform: Atari 7800
Imagine the situation that we humans are actually aliens on Earth, and its indigenous inhabitants, Xevionians decided to return the planet to themselves.
The last hope of people is connected with Solvalou. And the enemy's forces are not weak. Deadly Domogram Rovers, Toroid Patrol Fleets and Zoshi Death Squads. Xevious introduced a new trend into the game world - you can shoot both air and ground targets.
Atari 7800: This version of Xevious just reminds the arcade version. The graphics are angular, and the colors are blurry. Have you often seen tanks in the water? Bombs pour closer to the fighter, this adversely affects later, when the boss appears. The shooting button is one, responsible for lasers and bombs. The sound is closer to the original in Xevious, but it's even more disgusting, after a while the repeating scraping signals start to feel abnormal (or is it just me?). No, it's nice to play, especially at the "Expert" level, I'm picking it up.
‹
›
Home
View web version