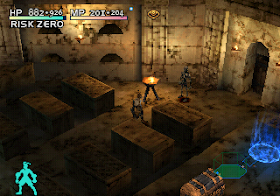 Genre: Role-Playing (RPG)
Perspective: Bird's-eye view
Gameplay: Puzzle-solving
Pacing: Real-Time
Interface: Direct Control, Menu Structures
Published by: Square Electronic Arts
Developed by: Square
Released: 2000
Platform: PlayStation (PSX, PS1)
Well, since the "Vagrant Story" was called, it means that you have to put up with it. The main thing after all, after all, it's not how this or that game is called, but what it represents. In this case, another "pleasant" surprise awaits us. Yasumi Matsuno, the creator of one of the best games on the PlayStation - Final Fantasy Tactics, is slowly but surely working on this project, and his ideological brother in the shop, who also attached his little Japanese pen (although if he is a sum wrestler, it will be, perhaps , not a small one and not a pen at all) Akihiko Yoshida.
All, including the author, immediately podnapryag-writing, once such notable gentlemen again set to work, then we are waiting for another tactical RePeGe? However, here the developers have fogged up and refuse to explain the outgoing foam to the fans, what kind of plan will be their new masterpiece and whether there will be at least any elements of tactical battles so beloved by the players of the whole world.
But they all "pleased" the following statement: Vagrant Story will be held until the end for 5-6 hours !!! WHAT FOR PUBLISHING ?! This, then, buys a certain average person himself this squeak, comes home, includes a prefix, relaxes and then ... BREAK, GAME OVER and all that! The only thing that comes to mind is that gentlemen of good developers have decided to sculpt a whole series of games with one acting hero or world, like what happens to Abe from the notorious Abe's Odessey. And then, where is it seen, that the game was called role-playing, and it lasted only 5-6 hours? Unclear.
It's a lot of it, it's time to tell about the storytelling, Once upon a time, in the medieval dark times, which Japanese developers love so much, there lived a certain Special Agent Ashley Riot. And everything would have been nothing to him, except that the evil programmers took and stuck it in ... the back of the controller's wire and forced to obey the player. And the latter could not think of anything better than how to start manipulating him, forcing him to carry out the most difficult task of freeing the castle of a certain Duke Bardorba. In his difficult journey, our hero will encounter numerous monsters, traps and other dangerous and complex obstacles, as always , generally.
As the Special Agent will solve their difficulties, it is not yet clear, the mechanism for holding fights, as already mentioned, is hidden by a tight cover of secrecy, however, as nowadays, the graphics will be voluminous, the music is good - we do not expect the other from Square. This wonderful product will appear on the shelves of happy Japanese shops in the autumn of this year, well, and in our region will get a little later, then we will return to this project.
‹
›
Home
View web version