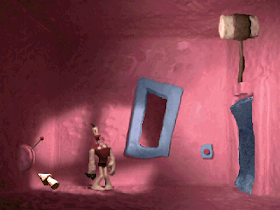 Genre: Adventure
Perspective: 1st-person, Side view
Visual: Fixed / Flip-screen
Gameplay: Graphic Adventure, Puzzle-solving
Interface: Point and Select
Setting: Fantasy
Narrative: Comedy
Published by: Riverhill Soft
Developed by: Neverhood
Released: 1998
Platform: PlayStation (PSX, PS1)
The gameplay in The Neverhood is similar to the traditional point-and-click puzzle quests. However, the game is very different from their colleagues in the genre. The main character will have to solve many puzzles on the way (in fact, they built the whole game), and the use of unusual vehicles, such as teleporters. The game has no interface, unlike other games where you would normally have to think very long time, why use one or another thing. During the game will be available a few items (bottle of water, matches, etc.), are scattered throughout the country 20 video discs that are necessary for the disclosure of the storyline, and for getting the last key for the final game.

The idea of ​​a plasticine world The Neverhood was born in Douglas Neypla Ten in 1988. It consisted of seventeen works that depict the quaint town of clay. In 1995, Douglas refers to the idea of the game, made entirely of clay, to Steven Spielberg and his studio DreamWorks Interactive. After a year of working together Dreamworks Interactive and Microsoft game goes on sale.

Klaymen - the game's protagonist, little man in a red shirt, brown shorts and a lone a hair on his head. The protagonist of the tragedy that occurred in his home country. That he has to go and solve all the puzzles in the game. Kleymen does not like to be in a hurry, it is quite calm and rarely speaks. The breast it has three buttons odd, left and right are needed for opening his own "safe" for storing the collected items, located in the abdomen (these two buttons Kleymen uses nearest to the player depending on which side it is deployed to it). Kleymen pushing the middle button to wake up the player for a long time if he does not move the mouse around the screen. Willie Trombone Kleymen established from seed (one byte) of life that popped out of the hands Hoborg asleep.
Willie Trombone - Kleymena best friend, a secret helper, in fact, cousin, cousin, son Ottoborga brother Hoborga. Does not possess the mind, but often helps Kleymenu throughout the game. Killed by falling together with the robot Bill into the abyss, but in a good endings resurrected Hoborg.
Hoborg - the creator and ruler of the country Neverhud. His first friend was Clogg, who later betrayed Hoborga. In the hall of fame (born Hall of records) of the country he called "Hoborg Big Heart" because of its warmth.
Klogg - the first living creature, created Hoborgom. Very jealous of the power Hoborga and wanted to get the magic crown. He managed to get hold of her deception, but the crown had affected him adversely as a result of it has changed in appearance and Hoborg plunged into eternal sleep. At the end of the game the player faced with the choice, which resulted in Clogg doomed: in one of the situations he gets hit by a cannon ball and thrown into the abyss of a plasticine space in the other - Kleymen kills him with his own hands. The game Skullmonkeys story develops with a flight into space. Clogg fell on a planet inhabited by a race of apes who have a skull for a head. Wearing a skull and hide, he changed his name to Kloggmonkey.
Big Robot Bil - a huge robot. When Clogg seized power, he changed his character to the bad (for this purpose the Bill had the handle on the inside of the back). Start your Kleymen climbed into a robot and returned back to the good character, then Bill was to obey him, and to think according to your heart. He fought with the Clockwork Beast, looked like a huge bird-robot minions and Clogg. From gun shot Clogg he fell and disappeared into the abyss of space. In a good ending was busy Hoborg.
Skullmonkeys - race of monkeys with the head in the form of a naked skull. In the game The Neverhood appeared only in the header video. Read the story is told about them in the game Skullmonkeys.

The soundtrack for the game was written by Terry Scott Taylor. It makes a significant contribution to the atmosphere of the game and is as recognizable as the game. At the same time the game was released on a single disc with 39 tracks, called Neverhood Songs. Until now, the tracks from The Neverhood can be heard in a completely different information notices, such as commercials and television announcements.

In 1998 came the continuation of the game from the same developer called Skullmonkeys. Skullmonkeys unlike The Neverhood was not a quest, a platformer with a 2D graphics and released only on the gaming console Sony PlayStation. In the story of the game, the main villain Clogg, on the events of the first game was exiled Neverhood, and, flying in space, falls to the planet Idznak. Once there, he decides to take over the planet's population - by the very Skullmonkeys - to destroy the country Neverhood. One of the monkeys flying transmitter sends Kleymen, the hero of the first game, which in this very country was. The transmitter is missing Kleymena and carries on Idznak. Kleymenu have to stop Clogg. The game consists of many levels, some of which end in a battle with the "boss." Also in the game has a narrative videos made with a classic series of humor.
In 2013, on the site Kickstarter has started fundraising for a new game from Pencil Test Studios - the company that created The Neverhood. The new game will be called Armikrog and will not be a direct continuation of The Neverhood, and will be the spiritual successor of the game with new characters. Armikrog keep the main distinctive feature of The Neverhood - «clay" characters and scenery. The main heroes of the game will be the cosmic wanderer Tommynaut and his talking dog Beak-Beak. In the story of the game after suffering a crash on one of the planets, the heroes find themselves in a fortress from which to find a way out. June 27 fundraiser successfully completed: the developers have collected about 975,000 dollars (with a minimum amount for the successful funding set by developers, 900 thousand). Estimated release date - July 2014. Armikrog will be available for Windows, Mac OS X and Linux, as well as for the Wii U. In addition, the game will be translated from English into Spanish, Italian, German, Polish, Russian and French.