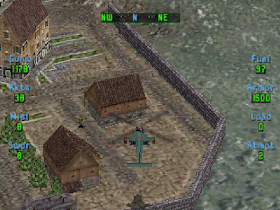 Genre: Action
Perspective: Bird's-eye view
Gameplay: Shooter
Vehicular: Flight / Aviation, Helicopter
Published by: Electronic Arts
Developed by: Electronic Arts
Released: 1996
Platform: PlayStation (PSX, PS1)
The action of the game Soviet Strike from the famous series "Strike" occurs in Russia, more precisely, in the USSR during the period of disintegration. A disgusting attacker - a former KGB general managed to "clean" the warehouses of the Armed Forces and mastered nuclear warheads and other weapons of mass destruction. It is clear, when the world public learned about this, then I experienced quite justified anxiety about this. The game consists of more than 40 quests. Your task is to capture the warehouses of the Shadow Man with the stolen weapons and eventually get rid of the General himself. The game begins in the Crimea: after learning about the actions of your opponent, you advance to the Black Sea, in order, among other things, to prevent the seizure of warships. Then several stages of the game take place in Transylvania, and the final stages in Moscow. You will have to go through a great number of subjects related to the seizure of populated areas (and sometimes even entire districts of Moscow) and enemy camps, attacks by armed groups.
During the five main stages you will need to lead a very thoughtful game. Sometimes, for example, you can let yourself relax and shoot everything that moves and does not move. But more often you face certain tasks, for example, to save your employees and other people without harming the enemy; it is often necessary to choose strategic objects against which to act first, for example, bridges or submarine bases. All the time you need to take care of replenishing your own weapons and fuel. Separate problem - to choose tactics in direct meetings with the enemy (it is useful, for example, to fly around enemy ships in circles, keeping them under the gun at all times and shooting - it's easier to hit and at the same time to avoid a retaliatory strike).
Bear in mind that the opponent can also change his tactics depending on your next actions. Moreover, it seems that he does not have a predetermined strategy at all, and you need to foresee it, based on careful observation and information that is delivered to you from the center. In particular, you have at your disposal documents Online Clue book and then, and the messages appearing on the screen from the information system Strike Net, often accompanied by radio text. In addition, you build a storyline based on plug-in video clips, and in some places the system will give you a hint of a sound signal.
In general, the atmosphere of the game is organized so that everything is "as in life." The most important role is played by a magnificent, absolutely realistic graphics. In the basis of landscapes, for example, the developers put the materials of aerial photography, which was specially conducted in different conditions. The feeling of realism is also promoted by the latest technical solutions at the time - various isometric effects, a tracking camera, wide use of video inserts with real artists and so on. In general, the Soviet Strike looks modern today, and the high degree of interactivity of the game makes it even more exciting. However, for someone not to have a wrong impression of the game, it is worthwhile to clarify - first of all the Soviet Strike arcade game, which successfully continues the tradition of the series, which, however, does not free you from strategic decisions and the need to work your head.

Overview of the main tasks

Freedom of action in the game Soviet Strike - nothing more than an illusion. After all, if you travel too far from the place where your goals are located, then fail the mission. The missions have a fairly rigid structure, and extremely rare deviations from the standard scenario, which the developers had in mind, can lead you to success.