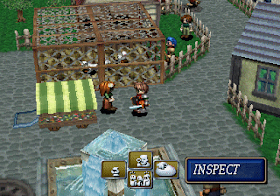 Genre: Role-Playing (RPG), Strategy / Tactics
Perspective: 3rd-person
Visual: Isometric
Pacing: Turn-based
Setting: Fantasy
Published by: SEGA of America
Developed by: Camelot Software Planning, Sonic Co.
Released: 1998
Platform: SEGA Saturn
This part of the game was developed exclusively for the SEGA Saturn console. Shining Force III combines three completely different stories of three completely different people who played a major role in saving the world from the forces of evil, the ways of which will often intersect with their events, but lead their chosen ones in different paths to the same goal. Heroes enter their path for various reasons, but in the end all three unite in the fight against the separatist grouping - the Bulzome sect, and then with the greater Evil who is the true instigator of the conflict.

To my pleasant surprise, the game has a lot in common with the first two parts. The protagonist walks through the cities, visits the same shops that were once in the original, talks with the locals, finds treasure hides. Everything was as it was then ... The cities of course changed outwardly, because of the other graphics and better features of the console, but everything in them is the same as before. There is a main building where plot events will occur. There are simple buildings where you can talk to the local population, find treasures or meet a potential associate. There are shops, all the same divided by the types of goods in them. The possibility of repairing the equipment, spoiled by frequent use in battle, has remained and rare items appearing after some battles. Church where the priest can save your game or resurrect the fallen ...
The battle, too, largely preserved its pristine system. Moving, as always, is completely manual, no cursors, etc. The action menu has not changed. Attack, Magic, Object and Waiting are all in their places. Enemies and allies walk by turns, depending on their speed. The terrain still affects the mobility of the character, reducing its combat characteristics in difficult areas. During the attack, as well as before, there may be a double hit or a critical hit, and the target of the attack may evade the attack or counterattack. There are many familiar enemies, and their allies have classes that were in the previous parts of the game.
But of course, and without innovations in any way.
Now the characters can learn not only magic, but also are able to improve their skills in the possession of each type of weapons available to their class. Each level of skill increases the damage from attacks with such weapons, as well as at certain levels issued a special reception that has special properties and excessive damage. This technique works like a critical one - accidentally, at the moment of an attack on the enemy. While each class of characters has its own set of weapons, it becomes even more interesting to play.
All attacks of units can vary in strength, depending on the weapon the target has. The system is similar to the principle of "Rock-Scissors-Paper". Swordsmen are stronger than shooters, arrows - spearmen, spearmen - swordsmen. Plus, there are several isolated variants of vulnerability for another more exclusive type of weapon. Such a system can help in the fight against powerful groups of enemies, if you use your units against enemies with a vulnerability to their kind of damage. When attacking an enemy with a vulnerability, a bubble with an exclamation point inside will appear above his head.
There was a system of friendship between the characters. Now each character can enhance the characteristics of his close allies with whom he is in friendship. Each type of unit increases a certain kind of characteristics, be it an attack, magic power, protection from fiz. attacks or magic, the probability of a critical strike, its failure to attack the enemy, luck, affecting the probability of status triggering, avoiding enemy attacks or the probability of a counterattack. Friendship has 4 levels. The higher the level, the stronger the increase, and the greater the distance between them. Increase the parameter of friendship is not difficult - you just need to do the same thing as the alleged friend: attack / kill one enemy or treat a potential friend. But the friendship parameter will go down to level 1 to all friends if the unit dies in combat.
In the status of the character is now slightly more characteristics: as already mentioned, this is luck, which affects the probability of the status changes on the character, and protection against elemental damage (Fire, Ice, Lightning, Wind, Light, Dark). Now for a weapon and an accessory, such as a ring, there is a separate slot. Ie the characters have 6 slots.
On the third disk there was an opportunity to conduct a third upgrade of the class of units. This brings even more interest in the game.
Well, the ability to forge equipment items from rare metals is now more similar in principle to what was once in the game of Shining in the Darkness. The blacksmith shows a character for whom you need to tie down the weapon, then the price of the weapon is indicated, that the player can pay for the work, and after that the blacksmith grabs weapons of the class that was equipped on this character at the time of the order. But, besides this, only one of the three types of weapons of this type is forged.

The capabilities of the 32-bit set-top box have greatly changed the graphics. The game is now done in full 3D. All cities and locations consist of 3D objects, the figures of the characters are also 3D. In battle everything is the same. In this regard, the game now has a rotating camera with three scales of view. Everything would be fine, but getting used to such a camera is not very easy, although then it will seem easy to control. The downside of the camera is that, on a modified scale, it returns to the default position for each action and event on the screen.
Because of the 3D graphics, all the larger locations are divided into separate parts, the transition between which requires some time to load, which is not encouraging. Similarly, with the entrance to the building. In addition to the fact that at each entrance the character opens the door for a long time (also with opening the doors indoors), so also the input takes some time to load.
The graphics are pretty good. Do not say that modelers of characters and other objects are pleased with the abundance of polygons, they are all angular and smeared. But to expect something else from the prefix, PSX level, it is difficult (although the PSX itself showed the opposite). Characters can be distinguished from each other, but most often they look like a bunch of polygons piled one on top of another. Models of units in combat, at the time of the attack, also look angular, but not much worse than the character models from FFVII. The effects of attacks on the same level, although some of them quite spectacular.

Music in the game did not please me. By sound, it does not differ from the one I once heard in the first or second parts. Ie it remained at the level of the 16-bit console. Of course some melodies are fairly tolerable and can be listened to while playing, but some abound with hideous sounds. For example, in the first city, the buzz of a certain duda, which spoils all the pleasure from exploring the location, is constantly woven into the music.
Sounds in the game differ little in quality from music. They are also at the level of 16 bit consoles. They are absolutely unlike the real ones, and even those that were in the old parts of the game. In addition to the sounds in the game, there are voices of characters that sound in combat during the application of the special. receptions and magic. All is well, but the words are almost impossible to disassemble and understand what the character is shouting before the attack. But it's not so terrible. Without voices, you can get by by turning off from the menu.

There are many innovations in the game, many good old ideas saved. To play is interesting and exciting. Fans of the series will be completely satisfied with this part. Even in spite of the terrible sounds and disgusting music, as well as angular and smeared graphics. This is not the main thing in tactical RPGs. Moreover, the game is divided into three storylines with completely different characters and events. What will give an additional reason to go through it all.
In general, I recommend the fans, everyone who is not familiar with the series should start with the first part. In addition to graphics, there are no significant differences between them.
‹
›
Home
View web version