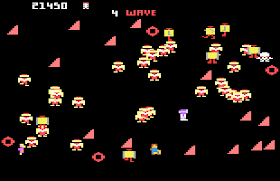 Genre: Action
Perspective: Top-down
Visual: Fixed / Flip-screen
Gameplay: Arcade, Shooter
Setting: Sci-Fi / Futuristic
Published by: Atari Corporation
Developed by: Vid Kidz
Released: 1986
Platform: Atari 7800
Robotron: 2084 is an arcade machine created in 1982 by Vid Kidz for Williams Electronics. The game used a unique control for that time - two joysticks, one for movement, another for shooting. They allowed to operate in one of 8 directions. Each level begins with the fact that you, the last hope of humanity, throws into the crowd brutalized robots. Dealing with them, you move to a more difficult level. The "humanoids" - the clones of the last human family, consisting of Mom, Dad and Mickey, slowly wander around the playing field. They need to be saved before they get aggressive aliens.
Atari 7800: The arcade situation was ported perfectly, insane shooting - the best remedy for stress. But the management is disappointing, it's not as it used to be. Graphically, everything is somewhat angular, there's almost no animation, so it's better to run any other available version of the game.
‹
›
Home
View web version