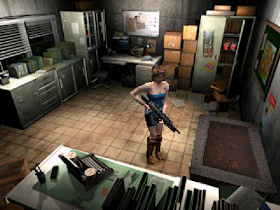 Genre: Action
Perspective: 3rd-person
Visual: Cinematic camera
Gameplay: Puzzle-solving, Survival Horror
Narrative: Horror
Published by: Capcom Entertainment
Developed by: Capcom Co
Released: 1999
Platform: PlayStation (PSX, PS1)
Resident Evil 3 is an intermediate (connecting event) part between the 1st and 2nd part. In this series, the main character Jill Valentine - member of the squad "S.T.A.R.S.". There will also be another playable character, Carlos. As in all parts, the main goal of the heroes is to get out of the city. You have to go through a bunch of zombies and various monsters. And in the end - to battle with the mutated boss Nemesis. The main differences from the first two parts are more elaborate AI enemies, a firearm-armed boss and advanced gameplay. Now the ammunition to the weapon can be made independently. Riddles have become even more difficult and now many of them are generated.

When the captain of the team Umberella rescue team shoots one of the members of his team, go to the computer on the table. Here you need a password, select "ADRAVIL", "AQUACURE" or "SAFSPRIN", make the right choice and the door will open.

When you meet the final boss (the last transformation of Nemesis), drive him back into the corner where he jumped out, using his rocket launcher and pelted with grenades. Then you need to put the gun on the line of fire, for which you need to press three switches marked with the numbers 1, 2 and 3. When you can cope with this, fire a cannon to destroy the debris, and then it will automatically fire, but in Nemesis'a. You will then have a choice, kill it yourself or just run away. The second way, apparently, is much worse, because as a result of self-punishment, you can get many different secrets at the very end of the game.

Combine the gold gear of Gold Gear from the Puzzle Clock Goddess Puzzle with a Silver Gear, you get a gear Chronos gear. It can be used to activate the hour bell. Insert this gear into the bell mechanism on the third floor of the Clock Tower.

If you enter the room save room, before you go to the police station, mix powder A and powder B on the shelf to make gunpowder C. Then mix it with gunpowder A, and after that, using your charger, you can make incendiary grenades, which is very good for a grenade launcher, which you will find in the police station in the room STARS room.

To find Jill's diary, you need to collect all the files in order. It's not easy, but the diary is worth it.
‹
›
Home
View web version