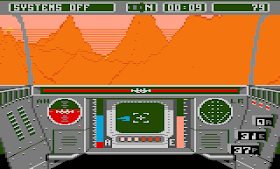 Genre: Action
Perspective: 1st-person
Setting: Sci-Fi / Futuristic
Published by: Atari Corporation
Developed by: Lucasfilm Games LLC
Released: 1987
Platform: Atari 7800
According to eyewitnesses, in 1984, when Rescue on Fractalus only appeared - on it gamers of that time were killed! The game used a revolutionary technology - the surface of the planet, covered with mountain massifs, was drawn on the fly, using fractals. Who does not know what fractals are - google help you .. Fractalus - the first game in which the possibilities of flight over the mountains, valleys and mountain peaks opened. By today's standards, everything is not so cool, but in those years it was incredible .. The mission begins on the main ship. Leaving behind a long tunnel, you are approaching the planet Fractalus. The control panel shows 19 different parameters, but only a few of them are needed for the game. The mission of your flight is to save the pilots and shoot the enemy. Having found out the pilot, it is necessary to lower the ship next to it and open the airlock. It even shows how the pilot knocks on the door and passes into the airlock! Fractalus is played as a simulator, but an action is also present. As soon as you understand the management, the game will not tear off.
According to information from a former GCC employee, the game was completed. But the prototype that is now, allows only to drop over the surface of the planet and fly over it. Shoot, land and kill will not work. But graphically Rescue on Fractalus has surpassed its predecessor on the 5200 platform. According to some sources, the game was created in 1984.
‹
›
Home
View web version