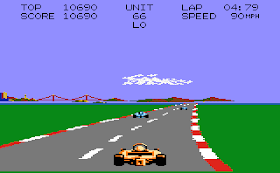 Genre: Racing / Driving
Perspective: Behind view
Gameplay: Arcade
Vehicular: Automobile, Track Racing
Published by: Atari Corporation
Developed by: Namco Limited
Released: 1987
Platform: Atari 7800
Yes, the rounded cars look more realistic, but the Pole Position II's gameplay is no different from the antique arcade original, except that it's less dynamic! Before each race, you have to spend time on qualifying heats (Atari 7800). The process of racing itself is decent, but the animation is not very much and the car behaves unnaturally on the track. The sound of the motor is another stone in the developers' garden. From the situation only Atari billboards every 150 meters. Not serious...
Atari 7800: Pole Position II was supplied with each Atari 7800, but it could be purchased separately. In fact, a stupid commercial move, given that Nintendo completed each of its Super Mario Bros! According to one source, it was planned in general to build a game into the console.
Pole Position II was written in 1984.
‹
›
Home
View web version