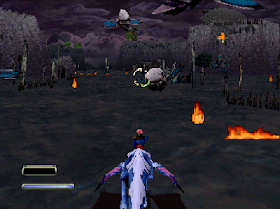 Genre: Action
Perspective: Bird's-eye view
Gameplay: Arcade, Rail Shooter
Interface: Direct Control
Vehicular: Flight / Aviation
Setting: Post-Apocalyptic
Published by: SEGA of America
Developed by: Team Andromeda
Released: 1996
Platform: SEGA Saturn
Arrived a year after the first episode, it is part of the generation of games that best exploit the capabilities of the console, after trial and error. Along with Virtua Fighter 2 and Sega Rally Championship, Panzer Dragoon Zwei represents, according to some players, the golden age of the console.

The game takes place about 20 years before the first opus. In the small village of Elpis, Monday Jean Jacques is a 14-year-old boy who lives in the middle of a clan of Coolias breeders (the Coolias are animals that look like big horses, used as a means of transport) . One day, he discovers a baby Coolia whose throat is a bright green glow, and has a pair of wings. It's a mutant Coolia, and the village rules order to kill any mutant because it could bring misery. But Monday hides the baby Coolia in his hut, without telling anyone, because he recognized in this mutant Coolia the characteristics of a nascent Dragon, and the name Lagi. For almost a year, Monday is witnessing the very rapid development of Lagi, who has already grown to the size of an adult Coolia, and who has developed wings that could possibly allow him to fly ...
At the same time, Shelcoof, a gigantic flying ship, is discovered by the Imperial forces, floating high in the sky, somewhere between the Mecchania territory and the village of Elpis. Immediately, the Imperial troops attempt to intercept the ship, obviously a relic of the Old Age. As the troops approached, Shelcoof abruptly changes course, and goes to the village of Elpis at full speed ...
In the hills near the village, Monday tries to fly Lagi. He gets there for a few seconds. It was at this moment that Shelcoof appeared in the sky, and annihilated Elpis with a single shot of an overpowering weapon. After the explosion, Lagi suddenly pulls laser beams from his mouth, directing them against Shelcoof, too high in the sky to be hit. Monday realizes that Lagi has indeed become a Dragon, holder of the sacred fire.
Monday has just witnessed the destruction of his village, and mad with rage, decides to hunt Shelcoof, beyond the lands and the air, mounted on the back of Lagi who also seems to have his accounts to settle with the flying ship. Monday, in its hunt, will also be confronted to the imperial forces, who want not only to intercept Shelcoof, the flying Tower (cf Panzer Dragoon) but who are also very interested in the Dragon.

One year after the first opus, the graphic aspect has evolved a lot. 3D is much better exploited [ref. necessary], the polygons much smoother. The environment is more detailed, and the effects of colors more vivid. Scroll speed has also increased.
The gameplay has not changed since the last episode. The player always embodies a Dragon Rider, who must shoot down enemies either with his gun, or by blocking opponents and sending them the Dragon's lasers. Several novelties however:
In addition to the life bar (the longest, at the bottom of the screen) there is a new bar, which loads as the player kills the enemies. Once this bar is loaded, it allows the player, by pressing a particular key, to trigger a blazing attack, called Berserk: a multitude of laser beams emerge from the mouth of the Dragon, and will reach all enemies on the screen. The attack is visually impressive because accompanied by great effects of light. If the bar is fully loaded, the Berserk will last several tens of seconds, and will only stop when the bar is empty. The player will have to start accumulating energy, so he will have to learn to know what is the right moment to launch the attack.
The player can choose which path he takes: indeed, in all levels, at a certain place, the player is asked to choose which side he wants to go to (all in the heat of the action). The basic course is easier, the alternative course increases the difficulty (not to mention the fact that it is difficult to maneuver to choose this course, while shooting at the enemies.) To choose a course, just direct the Dragon on left or right-or in some cases, up or down-). Alternative courses also report Route Points at the end of the level.
The Dragon is evolutionary. Indeed, at the beginning of the game, the Dragon is quite young, not very resistant, and his bars of life and Berserk quite small. At almost every end of the level, the Dragon will evolve, and by acquiring a new physical appearance, he will gain endurance (life bar) and Berserk. But these evolutions are done according to the number of enemies killed, and Route points gained by level: in other words, if the player wants to finish the game having the most powerful form of the dragon, it will have to cut down 100% of the enemies, and systematically borrow alternative courses.
As a bonus, after finishing the game for the first time, the player unlocks the Pandora Box (word game between the Pandora's Box -Pandora's Box in English- and the initials of the title of the game in Japanese -Pantsâ Doragûn-. Western, so as not to lose word play with the title, this option has been renamed PanDra's Box). This is a new option menu, which allows you to set different aspects of the game (the appearance of the Dragon, his level of life bar, Berserk, choose the level from which to play, etc.). But all options of the Pandora Box will have to be unlocked over the different parts (depending, again, the number of enemies slaughtered and Route Point, with 100% success to unlock the entire Pandora Box).
The main difference with the previous game is the music. In the first game, it was rather symphonic (see the music of the first level), but in Panzer Dragoon Zwei it becomes more tribal, and it is a style that will remain for the following games.
‹
›
Home
View web version