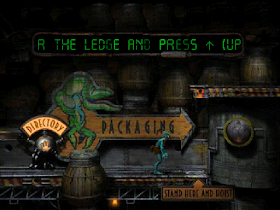 Genre: Action
Perspective: Side view
Visual: Fixed / Flip-screen
Gameplay: Platform, Puzzle-solving
Setting: Cyberpunk / Dark Sci-Fi, Sci-Fi / Futuristic
Published by: GT Interactive Software
Developed by: Oddworld Inhabitants
Released: 1997
Platforms: PlayStation (PSX, PS1), DOS
This game, or rather a series of games stand apart in the world of video games. The creators of the game are Sherry McKenna, who came from Hollywood, where she received more than 70 prizes and awards, working as a special effects designer, and Oddworld Inhabitants president Lorne Lanning, who also worked a lot in Hollywood, as well as a team of enthusiasts tired of templating games. The idea to create video games with "live" characters that see and hear, normally move and look, came Lorne for a long time. And now this "sweet couple" with enthusiasm and not without technical difficulties created a game in which the level of artistry, taste and reality that had never been seen before was achieved. The characters will be as if alive, and the players will be part of what is happening and, as in life (or in a good movie), empathize with their heroes. In this game there are no "Power-Ups", levels of health, energy, blood, no extra lives! But, of course, there are puzzles, as in life. Specialists in computer graphics were invited from Hollywood, and game designers and engineers - from "gaming" firms. In their cooperation and discussions a masterpiece is born.
In the world Oddworld lives Abe. His world is very similar to ours, as are his problems. Abe is like one of us, and with a fantastic reality we see ourselves as if in a mirror! A small man is in a huge world! And he tries his best to break out into the "people", to become above the circumstances. For the time being, he is essentially a slave at a meat processing plant. And, in general, he is satisfied, until he realizes that he and his comrades (labor) are in fact a "reserve" in case of a shortage of raw materials. Now his task is to get out of the factory, and yours is to help him. But he not only has to save his life (not to make a sausage out of him), but also to save the lives of his comrades! He now takes "Game Speak" - a small vocabulary that allows him to communicate with friends to guide them through the mystical passages of "Bird Portal". His only weapon is courage and will - by them he defeats his enemies. After escaping, Abe meets a powerful shaman who tells him the prophecy. According to him, Abe destiny is destined to release the "Mudokons" (workers). Now Abe must perform three harsh tasks in order to justify the choice of Destiny. And this, of course, is the most difficult. He must return to the plant and destroy it. Whether he succeeds or not depends not only on him, but also on "Quarma" - the karma-destiny of Oddworlda. And the game takes place depending on what actions Abe is taking.
The unique concept of the game is an honest and sincere attempt to change the face of video games and disrupt the emerging conservative tendencies. It can be confidently asserted that Odyssey Abe (it was planned to create five games in the series, but did not work out) won the fans of video games of different ages.
‹
›
Home
View web version