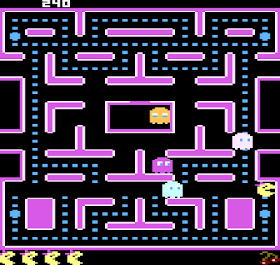 Genre: Action
Perspective: Top-down
Visual: Fixed / Flip-screen
Gameplay: Arcade
Published by: Atari Corporation
Developed by: General Computer Corporation, Midway
Released: 1987
Platforms: Atari 7800, Nintendo (NES)
The game Ms. Pac-Man is magnificent in every sense. In the idea, she repeats the classic Pac-Man'a, and in the role of the protagonist is his girlfriend. After its release, the game touched the hearts of not only gamers, but also gamers (girls-gamers). This was calculated.
For Atari 7800 Ms. Pac-Man is made exceptionally high quality, color labyrinths, and other cute inclusions, all as in the arcade version! This version of Ms. Pac-Man faster than others, management is obedient. It is unclear why in the beginning of the game is given 5 lives instead of three. Since they are going to fully simulate the arcade version, so imitate! Everything, I will not grumble any more, the game is worthy.
‹
›
Home
View web version