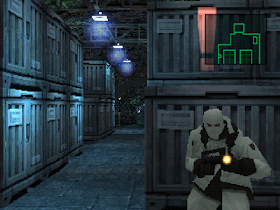 Genre: Action
Perspective: 1st-person, Top-down
Visual: 2D scrolling
Gameplay: Shooter, Stealth
Interface: Direct Control
Narrative: Spy / Espionage
Published by: Konami of America
Developed by: Konami Computer Entertainment Japan
Released: 1998
Platform: PlayStation (PSX, PS1)
XXI Century. The warehouse in Alaska is captured by the former military unit of FoxHound and you, a former member of this "team", are heading to Alaska to deal with everyone alone. The plot of a typical Hollywood action movie, but for you it is also a personal problem. The "bad guys" are commanded by a very bad guy - Liquid Snake, he used to be your friend. Note that the game's series of games is performed in a purely Hollywood manner, but here the similarity ends. Behind this completely simple story is the game - Metal Gear Solid, and it's not at all easy! The action develops as follows. You enter the warehouse with only one hard drive (but as you move forward, heavy firearms and explosives will be available to you). Moving around the perimeter of the warehouse, you count the patrolling terrorists, service dogs and surveillance video cameras, gain more weapons. Your best tactic is to stay cautious, keep secluded places and deal with security on your own. However, your "spy" arsenal of these actions is not exhausted. You have to find and use various devices and objects, maps - omissions and devices that allow you to safely wade past the numerous guards and patrols deployed by terrorists. For example, a pair of infrared glasses, through which "find" laser beams penetrating the central corridors (elements of the alarm system). You also have to gather information from the released hostages and from intercepted radio messages. And although at first the game may seem simple enough, for success in it you will need to use your intellect to the fullest. And the results will not slow down - the game is worth it!
‹
›
Home
View web version