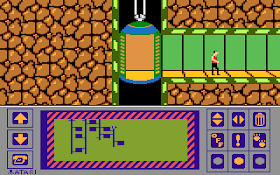 Genre: Action
Perspective: Side view
Visual: 2D scrolling
Gameplay: Platform, Puzzle-solving
Setting: Sci-Fi / Futuristic
Narrative: Spy / Espionage
Published by: Atari Corporation
Developed by: Epyx
Released: 1987
Platforms: Atari 7800, SEGA Master System (MS)
TOP SECRET
TO: Special Agent 4125. Description of the Mission.
Purpose: A mission of great importance for national and global security. Operative actions start immediately. The ultimate urgency.
Situation: Over the past three days, all key military computer installations of world powers have reported failures in the security system. In all cases, someone got access to the main computer of a missile strike.
Only one person could do it on such a scale: Professor Elvin Atombender (Elvin Atombender) (hereinafter referred to as "Alvin").
We believe that Alvin is working on breaking into computer startup codes. Upon completion, he plans to cause a missile strike and destroy the world.
Mission: You must penetrate Alvin's underground citadel and stop it. To successfully complete the mission, you should avoid encounters with security robots, crack the security code and find a control center. Your predecessors Agents 4116 and 4124 (may their souls be resting) managed to send a little information about the installation of Alvin. It is provided below.
Your only weapon will be your brain and MIA9366B handheld computer. Good luck. The world hopes for you.
The game was originally developed for the Commodore 64, and later ported to Apple II, Atari 7800, ZX Spectrum, Acorn Electron, BBC Micro, Amstrad CPC, NES and Sega Master System. Nowadays, the game can be found on Nintendo DS, PSP and Virtual Console (Wii). Also, there were official continuations of the game.
‹
›
Home
View web version