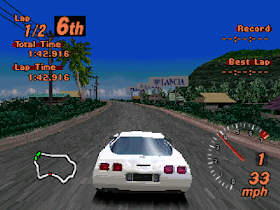 Genre: Racing / Driving, Simulation
Perspective: 1st-person, 3rd-person
Gameplay: Vehicle Simulator
Vehicular: Automobile, Track Racing
Published by: Sony Computer Entertainment America
Developed by: Polyphony Digital
Released: 1999
Platform: PlayStation (PSX, PS1)
The game was well received by both players and critics. As of March 2009, 1.71 million copies of the game were shipped in Japan, 20,000 copies in Southeast Asia, 3.96 million copies in North America and 3.68 million copies in Europe, totaling 9.37 million copies. GT2 is included in the Sony Greatest Hits lineup. On the Metacritic site, the average score of the game is 93/100. Gran Turismo 2 was also the first PS1.
The game uses two completely different modes - arcade and simulation. In arcade mode, a player can freely choose cars and tracks, and participate in races. In simulation mode, the player needs to get a driver's license, pay for cars and earn trophies in order to open new tracks. In Gran Turismo 2 there are 650 cars and 27 racing tracks.
During its release, the GT2 boasted the largest list of new and old cars (about 650 copies) available in one game from a variety of automakers. For comparison: the original Gran Turismo and Gran Turismo 3: A-Spec had fewer than 200 cars. Some well-known manufacturers such as Ferrari and Porsche were not represented in the game, due to the inability to obtain the necessary licenses. But in the case of Porsche was found out - Ruf, the company that makes modifications to Porsche cars, was included in the game as an alternative.
Because of the accelerated development, the game has a car, access to which can only be obtained with the help of Gameshark, or other similar cit-disks. This Mercedes CLK Race Car and Volkswagen Polo 1.4. On the Internet there are several videos that prove the existence of these machines. In 1999 there were rumors about the presence of McLaren F1 in the game, but they were not confirmed, as there are no cheat codes and no confirmation from Polyphony Digital, which would have proved the presence of this machine.
Unlike its predecessor, in which there was a certain system of tournaments, in GT2 a player can take part in races in any order. The player can no longer pass the qualification stage before each race.