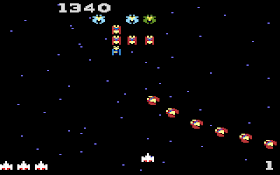 Genre: Action
Perspective: Top-down
Visual: Fixed / Flip-screen
Gameplay: Arcade, Shooter
Vehicular: Space Flight
Setting: Sci-Fi / Futuristic
Published by: Atari Corporation
Developed by: Namco Limited
Released: 1987
Platform: Atari 7800
... They're coming! Of course, they want to take over the Earth. And you (naturally!) Were left completely alone against a whole host of aliens. Now, and get out. Vaon they flew in a flock. The task is to destroy all enemy ships. The enemy has one strategy - they fly out in a chain, make a circle on the screen and line up in a row. With each level of Galaga, there are more and they are getting closer. Once the ranks are built, they gradually begin to descend. If at least one of their ships reaches your "red" zone - you lost.
Well, a very old classic game!
Galaga differs from its predecessor Galaxian, as a daughter from his mother. Realistic sound of the explosion with the loss of the ship, nice music, statistics at the end of the game and the bonus stage "Challenging Stage" after passing four levels, in which the enemies fly around the screen without shooting. The main difference is that in Galaga the battle begins with a "prehistory". Aliens fly over complex trajectories, after which they line up in battle formation. Here already begins Galaxian. Aliens are moving towards you, periodically one of them breaks and dives, actively spending ammunition.
The original Galaga was ported to the Atari 7800, Sega SG-1000, BBC Micro, Game Boy (bundled with Galaxian), GameTap, MSX, NES, Famicom, TurboGrafx 16. The game was re-released on Xbox 360 (Xbox Live Arcade), Wii ( NES version on Virtual Console) and mobile platforms. Unofficially, the game was released on the Commodore 64 as a clone of Galaxy.
In the series of collections of the Namco Museum, Galaga was released on: Sony PlayStation (Namco Museum Volume 1), Nintendo 64 (Namco Museum 64), Sega Dreamcast (Namco Museum), PlayStation 2, Xbox, Nintendo GameCube, Game Boy Advance (Namco Museum , PlayStation 2, Xbox, Nintendo GameCube, Game Boy Advance and Microsoft Windows (Namco Museum: 50th Anniversary Arcade Collection), PlayStation Portable (Namco Museum Battle Collection), Nintendo DS (Namco Museum DS).
Atari 7800: Galaga was created in 1984!
The game can not be compared with the version for Nintendo (1988), which is performed in an arcade quality. The ship is smaller, so it's easier to shy away from bombs, a little smeared aliens, and the "bosses" are the same size as everyone else. Well, at least all the melodies and sound effects are included. The gameplay is still impetuous, but ONLY in EXPERT mode.
‹
›
Home
View web version